Hailing from America’s East Coast Don’t Sleep have just unleashed their latest full length Turn The Tide. Fronted by the irrepressible Dave Smalley Don’t Sleep draw a direct lineage from his previous bands (DYS, Dag Nasty, Down By Law) yet the assembled musicians add an original edge that points to a bright future.

A wall of glorious feed back heralds the arrival of opening salvo ‘Don’t Sleep’ which soon bursts into life with the force of a buffalo stampede. Perfectly straddling the line between hardcore and punk ‘Don’t Sleep’ is a ball of nervous energy that, with all the excess fat trimmed off, takes the most direct route to what the fuck it’s all about and summarises the bands manifesto in 75 succinct seconds. Liberally soaked in melody and swinging with an inherent groove ‘Don’t Sleep’ radiates positive vibes and it’s a short, sharp, shock that’s certainly not for somnambulists.

Don’t Sleep are a band who know they’re onto a good thing and, quite rightly, they’ve picked up the ball and ran with it. It’s a sound that recalls the glory days of hardcore (think Gorilla Biscuits and Chain Of Strength) yet it’s forward facing too. The blast beat that opens ‘No Other Way’ is unique and new but it works surprisingly well and renders the song very skateboard friendly and seems tailor made for kickflips on half pipes. Imagine Polar Bear Club jamming with Rites Of Spring and you’ll have something approaching the emotive and muscular ‘Reflection’ and that fusion of tender and punchy is one of many juxtapositions that makes Turn The Tide such a rewarding listen.

Marching like an army of giants Garrett Rothman’s cool bass rumble powers the angular, riff heavy ‘True North’ forward and, in an album that’s always shifting gears, precedes the frenetic ‘Abandoned Us’. With foot to the floor and all the needles in the red it seems destined to ignite mosh pits wherever it’s played. Marinated in melody ‘Prisoners’ tempers its pop sensibility with a dark lyrical astuteness before ‘We Remain’ gets right in the listeners face with some fine gang vocals. Barely pausing for breath ‘Walking in Sinai’ finds guitarists Tom McGrath and Tony Bavaria riffing in tandem to create a wall of sound while Jim Bedorf hits the skins particularly hand and ensures ‘Refine Me’ bounces like a pair of Nike Air.

‘Foundation’ puts Dave’s vocals centre stage and he barks his words with added aggression and it’s this rage which makes the quiet storm that follows even more powerful.

The influence of Bad Brains on modern hardcore cannot be overestimated and Don’t Sleep repay a few roots on ‘The Wreckage’. Alternating shimmering reggae with hardcore rage constantly repositions the listener and, clocking in at almost five minutes, allows the band to spread their musical wings. The lo-fi and upbeat ‘December ’is something of an earworm which throws a curve ball and concludes Turn The Tide on a positive note.

After four decades in hardcore Dave Smalley has come up trumps again with his band Don’t Sleep. And in a year that’s seen stellar releases from the Cro-Mags, Change and Take Offence Turn The Tide stands tall amongst such luminaries. 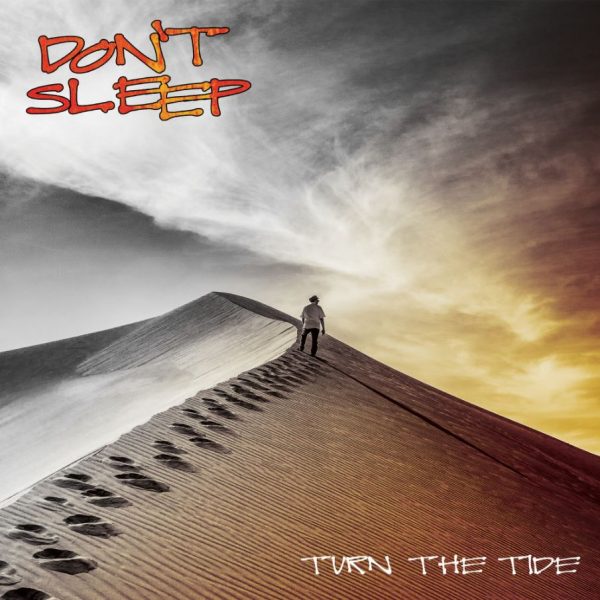