There’s a reason while traditional metal stills sounds great after all these years. Quite simply it’s brilliant, especially when played with conviction by a group as good as Dogbane. While genres rise and fall and fads come and go heavy metal stands, like Everest, immovable. In fact if they drop the nuclear bomb I’m pretty sure only cockroaches will survive…and Dogbane’s latest opus Idylls of Woe.

Wasting little time on preliminaries Idylls of Woe kicks off in the best possible style with the raucous ‘The One I Was Warned Of’. Opening with twin guitar lines as pioneered by Thin Lizzy it then becomes a galloping affair very much in the vein of Iron Maiden. In fact when I first heard Dogbane I thought theywereBritish (they hail from Greensboro, USA) as the band’s sound very much has that aesthetic. There’s a definite NWOBHM feel running throughout Idylls of Woe that recalls Cloven Hoof and Grim Reaper. Perhaps not surprising when Dogbane cite Maiden, Priest and Saxon as major influences. And like those heady days of 1979 Dogbane’s brand of metal is both hard and aggressive without sacrificing melody. There’s a real groove underneath the sonic fury of ‘The One I Was Warned of’ that renders it extremely catchy. It’s the kind of song that immediately demands you reach for your air guitar: always the litmus test for good metal.

Next cut ‘Devil’s Stamping Ground’ could be considered proto-thrash (like much NWOBHM). It’s not quite speed metal but it’s certainly knocking on the door and, as a song, it’s a great vehicle for Jeff Neal’s voice. With a huge range emanating from his pipes he sometimes squeals like King Diamond or, as here, he drops a few octaves as his vocal lines follow the rhythm guitar which adds another texture to the sound. What really shines forth from Idylls of Woe is authenticity. Aside from a few choice samples (that add to the atmosphere) there’s a pleasant lack of pro-tools, triggered drums or studio trickery which gives the album an almost live vibe. That’s not to say Idylls of Woeis sloppy: far from it. Almost a decade playing together has given Dogbane a real telepathy and they lock together in a tight-but-loose style.

The spacious production is also a boon as the drums reach the peripheries of your speakers and create a space inside which guitarists Mitchell Allred and Jeff Reinhart fire off each other. The epic ‘Blood in the Snow’ stomps like the Yeti on a rampage before ‘Riddle of Steel’ verges into doom territory. Sabbath-esque in its weighty feel with a riff Tombstone Tony would be proud of and, like Sabbath, Dogbane understand the dynamics of music. ‘Riddle of Steel’ is not all pummelling riff: tempo changes act as light and shade, each acting as a foil to enhance the other.

With some fine guitar work ‘Land of Shadows’ is very evocative and almost ethereal in conjuring images of haunted Gothic mansions. Keyboards, often considered the antithesis of metal, are used sparingly throughout Idylls of Woe and when used correctly they can add to the atmospherics which is the function they serve here. With a crushing riff (think Crowbar or Clutch) that swings like a wrecking ball gradually picking up speed the ‘Winter of Man’s Demise’ finally climaxes in a crescendo. Bringing things full circle, the album ends as it began with the chunky riff of ‘Sin Eater’ and like all of the songs on this record it’ll hang around your brain long after the disc’s stopped spinning.

Four years in the making, Idylls of Woe finds Dogbane continuing on an upward trajectory and, like the genre of metal, I don’t think anything can stop them. 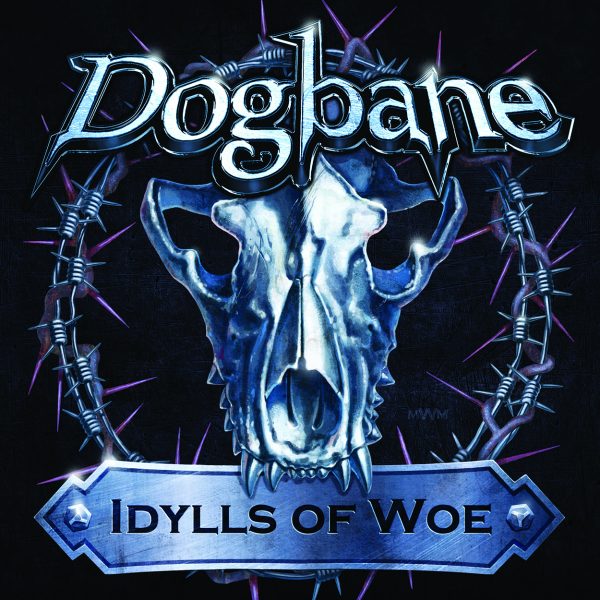