Blast from the past

For the second generation of punk rockers – think studded leathers and explosive bleached hair – few bands carried quite the same authority and respect as Discharge. While for some the hate filled aggression was little short of purgatory from the Potteries, for others the anti-war lyrics coupled with cruise missile like speed and accuracy, Discharge’s spiky-tops were a few inches above the parapet of their contemporaries.

Their distinctive band name was painstakingly etched in white on the backs of thousands of black leather jackets and they even lay claim to inventing the much heralded ‘D-Beat’ style of drumming, essentially a dynamic pummeling at blitzkrieg speed the like of which had scarcely been heard of before. Their aggression and agitated state made Discharge one of the few bands of the early 80s to bridge the punk-metal divide and this at a time when Saturday afternoon punch-ups were still a tiresome reality for many who almost literally pinned their musical allegiances to their heart.

The seeds of Discharge were sown in the late 70s by twin brothers Bones and Tezz Roberts and their friend Rainy Wainwright. With Cal Morris on vocals, their debut EP Realities of War was a combustible four-song outburst that pretty much ripped your face apart like a nail bomb. It was anathema to much of what was going on at the time and its vitriol and sheer viciousness were unparalleled at a time when early punk upstarts such as The Stranglers were settling into their ‘Golden Brown’ easy listening years. Although it’s unlikely if they knew it at the time, but the whole speed assault with which Discharge were not so much intent on pushing the barriers back as dismantling them all together, was being loosely replicated across the Atlantic where the likes of Exodus were at the forefront of the California Bay Area thrash metal scene.

The Discharge name has understandably faded with the passing of more than three decades. Their name, and in particular their classic 1982 full length release Hear Nothing, See Nothing, Say Nothing is often cited during interviews as an inspiration, and their early songs have been covered by metal royalty such as Machine Head, Sepultura and Anthrax. They eventually sailed into the sunset in the mid 80s, Bones leaving to form Broken Bones, as the UK punk scene gradually disintegrated and little of any significance was seen or heard of Discharge for well over a decade.

In 2002 there was a reunion of sorts and a self-titled album released but when it came to touring Cal called it quits and Rat Martin from The Varukers took over the mic, going on to front the band for 10 years during which they released a few records largely in the classic Discharge traditions. After further line-up changes the band have now settled on what is pretty much the original format of the band bar original singer Cal Morris, an absence that continues to cast a fairly significant shadow over the whole project. In his place is Jeff “JJʺ Janiak well known in punk circles for his role with Broken Bones.

German metal label Nuclear Blast have though pushed any reservations around this line-up aside and have just released a new album from the Stoke-based band, called End of Days. What we get are 15 songs, most just over the two-minute mark, that explode like mini Molotov cocktails. The energy and delivery is still very much punk rather than metal, tracks like ‘The Broken Law’ having a good sing-a-long chorus.

Having heard Discharge first time around, End of Days does inevitably lack a little of the shock value of their confrontational 80s heyday. JJ does sound similar to original singer Cal and the old firebrands clearly still have the stomach for the fight, albeit probably a shade paunchier than 30 years ago. Tracks such as ‘Hatebomb’ have an almost Motorhead feel, especially with the thrusting riffs while the insane drumming around which much of their success was attributed is as incendiary as ever although thesedays there are probably plenty of bands doing something similar.

It’s also worth pointing out that Discharge were a product of their time when street violence on everything from ban the bomb rallies to National Front marches and Stop the City protests was visceral and the scent of violence never far away on a night out in the big city. The nuclear threat seemed real even if it wasn’t and Discharge were of that spotty generation of streetkids told to duck under the kitchen table when the big bubba blows.

On ‘Hung Drawn and Quartered‘ Discharge seem on a mission to turn the clock back a generation. That’s never going to happen but if the intention is to give a whole new audience a fleeting taste of what hardcore punk sounded like in the early 80s then End of Days just about achieves its goal. 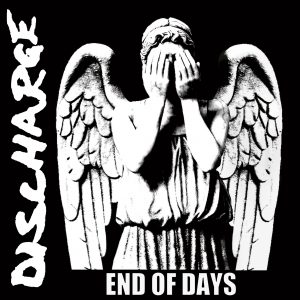