Those lucky enough to have witnessed Dio live in concert will know just how hard Ronnie James Dio worked the stage and that ethic shines through every note of these two reissues. Listening to both Evil Or Divine and Holy Diver Live it’s easy to see why Ronnie was much loved and these live albums are testament to the alchemy that occurred every time he trod the boards. 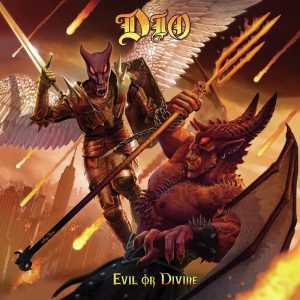 Always giving fans exactly what they wanted (classic Rainbow, Sabbath and choice Dio cuts) was a blessing and a curse: people left shows happy but it means every live album has a similar tracklisting. Recorded in 2002 while touring Killing The Dragon this set benefits from featuring three songs from that record beginning with the explosive title cut. With plenty of squeal from Doug Aldrich’s guitar it sounds far weightier and the vast, expansive production puts you right in front of the stage and authentically recreates that live experience. By 2005 Dio’s voice had aged like a fine whisky and it sounds especially malty on the coupling of ‘Egypt (The Chains Are On)’ and ‘Children Of The Sea’ and, having lost none of its range, he hits all the right notes.

Ronnie certainly had a knack of surrounding himself with the best musicians and Aldrich pulls out a fine solo amidst ‘Man On The Silver Mountain’ before delivering the crushing riff of ‘Lord Of The Last Day’. The equally heavy ‘Fever Dreams’ is the last of the contemporary tracks then we’re straight into legend territory. If you grew up anywhere near the ‘80s then you’ll revel in tracks like ‘Holy Diver’ and ‘The Last In Line’ and you can almost feel the waves of affection and adulation that radiate between crowd and stage during the callback vocals on ‘Heaven And Hell’. Former AC/DC drummer Simon Wright gives it some serious kick on ‘Rainbow In The Dark’ and, draining the tank, an explosive ‘We Rock’ brings down the curtain in fine style. 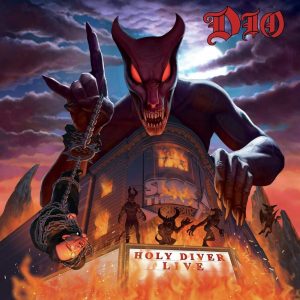 As debut albums go, Dio’s 1983 opus was damn near faultless. Legend has it that Ronnie visited Tintagel Castle for inspiration and it surely made Holy Diver a magical affair. The 22nd October 2005 found Dio at London’s Astoria where he performed that album in full, later to be immortalised as 2008’s Holy Diver Live. Openers don’t get much better than ‘Stand Up And Shout’ and from here on and until ‘Shame On The Night’ it’s a full on, foot-on-monitor, horns-held-high, metal fest. In between we get a majestic rendition of the title track, the riff-tastic ‘Caught In The Middle’ and the musical spectrum that is ‘Rainbow In The Dark’. Like Evil Or Divine this set benefits from quality remastering and my only gripe is that the songs fade to silence between tracks which breaks up the live feel somewhat. But, as a live rendition of a classic album, it really hits the mark.

I always felt that Dio had a special relationship with the UK and a rowdy London crowd seem well up for this gig. And what an evening it was: in addition to Holy Diver a ‘greatest hits’ set follows and, in a case of deja vu, a few tracks are duplicated from Evil Or Divine but there’s some surprises such as ‘Tarot Woman’ and ‘One Night In The City’. It’s the same line up on both discs (only with Rudy Sarzo replacing Jimmy Bain on bass) and the band display an undeniable chemistry on the epic ‘Gates Of Babylon’. But don’t head for the exit just yet because an extended ‘Heaven And Hell’ is about to take the roof off before the gentle medieval noodlings of ‘Catch The Rainbow’ crash head on with the raucous ‘Long Live Rock ‘N’ Roll’. ‘We Rock’ is the mandatory closer and, if you only own one Dio live album, make sure it’s Holy Diver Live.

Bonus Tracks: Best Of Studio Albums 1996-2004 (on vinyl configurations only)

Bonus Tracks: Best Of The Studio Albums 1996-2004 (on vinyl configurations only)