The last four Dio albums are often overlooked and, in a stellar canon, that’s kind of understandable. Ronnie James’ vocals appear on genre defining records by Rainbow, Black Sabbath and (the modestly titled) Dio band so it’s perhaps natural that these four independent releases, alongside those of Elf, are the last people stumble upon. That’s a shame because they stand up very well (the final triptych in particular) and they finally get a major label reissue, lovingly remastered and each with a bonus disc. 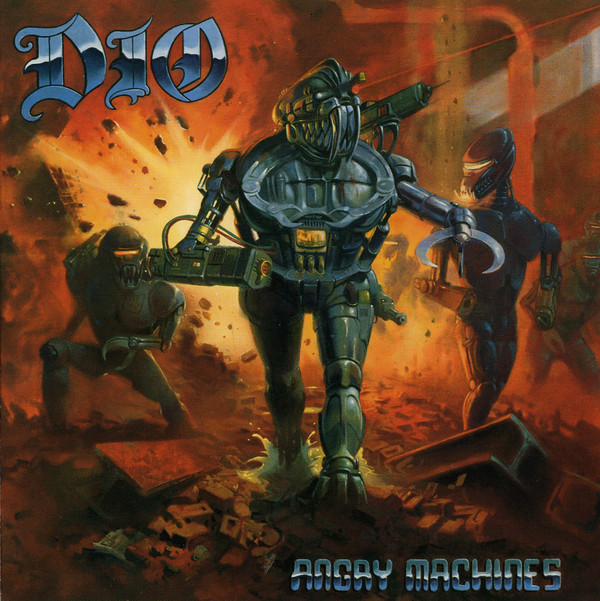 The 1990s were a pretty barren time for a shameless metalhead. Grunge (like punk before) had completely altered the musical landscape and many established metal bands were forced to change style, either through record company pressure or the shifting zeitgeist, and needless to say, the result was rarely laudable. Released in 1996 Angry Machines was the Dio bands first album for an independent label and found them forging new musical territory. It’s arguably the weakest record in the Dio discography but it is certainly the bravest. Out go the Dungeons and Dragons lyricism along with the neoclassical flourishes, in come a wordy realism and a contemporary industrial sound. Things start promisingly as ‘Institutional Man’ which, with a chugging riff, stomps all over the shop like a modern day ‘Iron Man’ and Dio’s vocals are still as strong and as omnipotent as ever.

Long time drummer Vinny Appice is a blur of sticks on ‘Don’t Tell the Kids’ yet it’s indicative of the new lyrical bent. There’s a reason why the fantasy words on Holy Diver meld so well with heavy metal yet it’s a lesson lost on Angry Machines. Things continue in a nu metal vein with electric shocks punctuating the riff heavy ‘Black’ and the epic ‘Stay Out of Mind’ which turns like a Ferris wheel at an evil carnival. By the time we get to ‘Double Monday’ the novelty is starting to wear thin and I’m missing the Dio from days of yore. The nursery rhyme that sandwiches ‘Golden Rules’ is just embarrassing and in an album that celebrates a discordant and dissonant sound the melodic ‘Dying in America’ is probably the standout track. By chasing a (then) contemporary sound Angry Machines is firmly rooted in the nineties while, paradoxically, an album like The Last in Line still sounds fresh and timeless.

It’s the bonus disc, however, where we hit pay dirt. Featuring a selection of live tracks recorded during the Angry Machines Tour this is the prime Dio that we all know and love. It’s a career spanning set highlighting all that was wrong with Angry Machines. A cheesy, demonic voice (now that’s more like it!) introduces ‘Jesus, Mary and the Holy Ghost’ which segues into ‘Straight Through the Heart’ and you can almost feel the electricity radiating between crowd and band. Those lucky enough to have seen Ronnie live will know how hard he worked the stage and that’s just what you get here with ‘Heaven and Hell’, ‘Man on the Silver Mountain’ and ‘We Rock’ all whipping the audience into a frenzy. 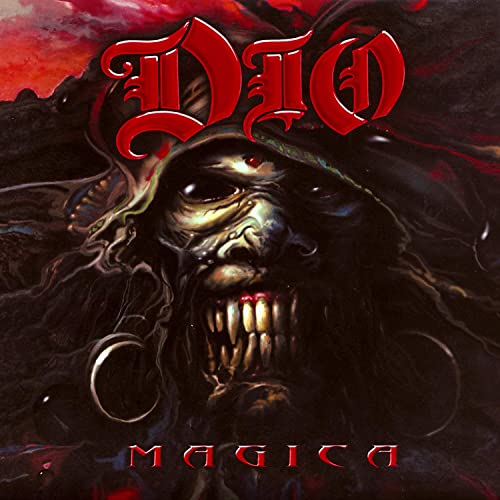 The year 2000 found Dio completely dispensing with the Angry Machines line up and reuniting with former compatriots Jimmy Bain, Craig Goldy and Simon Wright. It proved to be a wise move and, fully revitalised, the resulting Magica was a stunning return to form. With more than a nod to J.R.R. Tolkien’s Lord of the Rings Dio delivered a fully fledged concept album that tells of dark mystical realms and legendary quests. As befitting such lofty ideas Magica has two introductions: ‘Discovery’ with a robotic voice (that returns throughout to link the narrative) while ‘Magica Theme’ features soaring guitars that transport the listener to another dimension. The album begins proper with the crushing ‘Lord of the Last Day’ as the band lock in to ensure the riff falls like a guillotine blade. Full of rich textures it even has some monks evocatively chanting, which is just what you want from a Dio record.

‘Fever Dreams’, with a riff that echoes ‘Man on the Silver Mountain’, has all the class of its forbearer as the following ‘Turn to Stone’ is an all out rocker that wheels out the big guns. Simon Wright’s thunderous drums are harnessed by Bain’s bass and they’re rolled along upon Goldy’s glorious guitar. The epic ‘Eriel’ smoulders like burning embers while you can hear the band having a ball on ‘Challis’ (which was another vital ingredient missing on Angry Machines). Garnished with baroque opulence ‘Losing My Insanity’ has a real Viking metal feel as the riff rises and falls like a longboat upon a stormy sea. ‘Otherworld’ is the perfect vehicle for Dio’s vocals which entwine the instruments and enhances the melody by addong a silky texture. Two songs are reprised to end the disc one yet, rather annoyingly, the 18 and a half minute ‘Magica Story’ that closed the original album has been moved to conclude disc two.

The bonus disc features 8 tracks from Magica performed live that all transfer well to the live arena, particularly ‘Challis’ and an elongated rendition of ‘Otherworld’ that’s stretched to almost twice its length. Originally Magica was due to be the first of three concept albums (alongside Magica II & III) but Dio died before the dream could be realised. ‘Electra’ is the only song that was recorded for those slated albums and it’s a fine teaser for what could have been. ‘Magica Story’ is a spoken epic that’s augmented by some gentle synths but the focus is on Ronnie’s voice. It’s a tale of biblical proportions concerning the eternal battle between good and evil and it is a shame he didn’t leave behind more of this type of work because he speaks with a warm, rich hue. 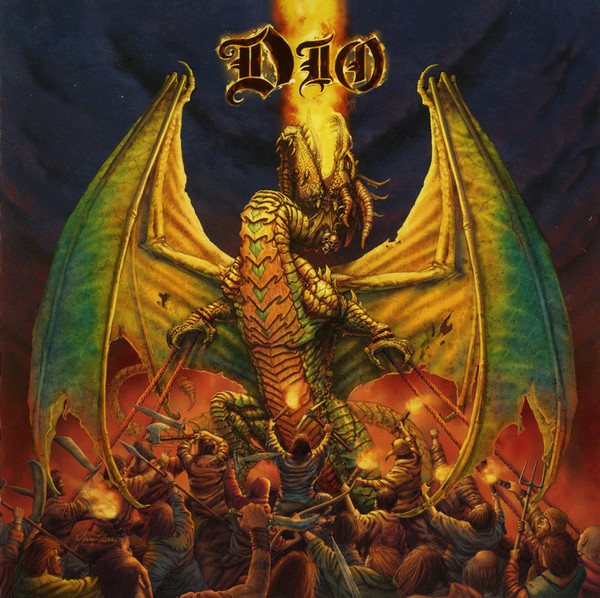 The epic vastness of Magica was always going to be a hard act to follow yet 2002’s Killing the Dragon succeeds by getting its head down for a full on metal fest. Going back to basics for a stripped down sound Killing the Dragon hasn’t totally dispensed with modernity (the ‘Dragon’ in the title, and opening, track refers to the perils of technology) but musically it’s all metal. With an Iron Maiden style gallop it fairly races out the blocks as new guitarist Doug Aldrich stamps his mark on proceedings with some cool soloing. Appearing like a huge tarantula ‘Along Comes a Spider’ is an energetic affair that’ll entice and ensnare you within its web. There’s little respite as ‘Scream’ is akin to a pillion ride through a nocturnal dystopian landscape before ‘Better in the Dark’ kicks up a gear with Jimmy Bain adding some nice bass runs.

The monolithic beast ‘Rock and Roll’ is a celebration of the genre and is a fine counterpoint to an otherwise speedy album. ‘Push’ puts its foot back on the pedal before Dio’s voice entwines the guitar like ivy on ‘Guilty’. The sobering ‘Throw Away Children’ precedes the chuggy and chunky ‘Before the Fall’ which is supplemented by some cool retro organ that brings to mind MKII era Deep Purple. ‘Cold Feet’ is the catchy closer with its circular riff that’ll haunt you long after the disc’s stopped spinning. It’s a groove laden rocker with a decidedly bluesy swing, especially when Doug Aldrich is set loose with his six string.

Completists who buy all four of these reissues may lament the addition of more live tracks as bonus cuts and Killing the Dragon provides a further six. It would have been nice if the powers that be could have unearthed some studio out takes, alternative versions or maybe radio interviews as many tracks are duplicated (‘Heaven and Hell’ appears three times over the four releases). However the rotating line up on these albums means that each live set has a unique feel with each musician allowed to impart their own stamp on proceedings, and these tracks from Toronto perfectly illustrate why Dio was such a hot ticket. 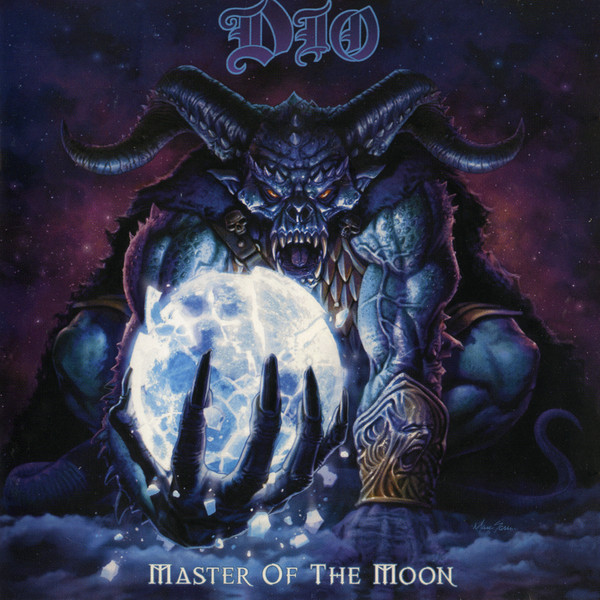 Master of the Moon

Being Dio’s last studio album (although he did release The Devil You Know with Heaven and Hell) there’s always a touch of retrospective sadness when spinning 2004’s Master of the Moon. It’s another solid album that further repairs the damage done by Angry Machines and continues the upward trajectory of its two predecessors. There’s something reassuringly familiar about the very metal sleeve which houses Master of the Moon and it’s a good indicator of the sounds within. ‘One More For the Road’ is a strong opener that harnesses a similar excitement found on ‘I Speed at Night’ as it bounces along like a rally car over rough terrain. A shift of gears are we’re into the mean and moody title track, an epic affair that lends itself well to Dio’s theatrical vocals and effortlessly sits alongside such luminaries as ‘Stargazer’ and ‘The Last in Line’.

More line up shuffles find Craig Goldy and Jeff Pilson returning but it’s essentially the same Dio with sterling songs about spells and sorcery. But there’s plenty of musical variety on offer from the bluesy shimmer of ‘Shivers’ to the robotic beat of ‘The Eyes’ to the staccato riff on ‘Living the Lie’. By 2004 Ronnie’s voice has matured like oak aged whiskey  and carries convincingly the banal lyrics found on the penultimate ‘Death by Love’ (“She’s a madman with a delicate hand”). Album closer ‘In Dreams’ is hard edged with a see-saw riff yet it is suitably ethereal and otherworldly and, as it fades into an elongated outro, it seems the perfect summation of Dio’s career.

Live tracks permeate the bonus disc and, rather disappointingly, they have a muddy sound that places them just above bootleg quality. But nothing can alter the majestic nature of ‘Heaven and Hell’, presented here in all its 10 minute glory, with some nice guitar work from Craig Goldy and some frenetic bass from Jeff Pilson, it’s the kind of epic tune you can loose yourself in. Recorded live on the Master of the Moon Tour you also get ‘Rainbow in the Dark’, ‘Rock and Roll Children’ and the contemporary ‘The Eyes’. Tagged on the end is ‘Prisoner of Paradise’, a track previously only available on the Japanese edition of Master of the Moon, a riff heavy rocker that brings down the curtain on a fine solo career.

Master of the Moon: