Watched the video above? Good, then you’ll know what to expect. Quirky, fuzzy punk, distinctly lo-fi, low budget fare, informed by Dare’s “strong dislike for nationalism”. In the words of The Clash, it’s a public service announcement – with guitars.

So, Dez Dare is actually one Darren Smallman – Australian-born and, since 2010, Brighton based. Originally played in a band called Warped and has shared stages all over the world with, amongst others, Fugazi. ‘Hairline Ego Trip’ is his latest album.

As already mentioned, ‘Dumb Dumb Dumb’ sets out his stall – clattering, psyche-infused quirk-punk that sounds like it was recorded in a moderately well-appointed shed. It’s garage rock in all it’s noisy glory.

It’s an album of vaguely eccentric short and sweet blasts. The songs literally fly by, 6 of the tracks barely scratch the 2 minute mark. They’re fuzzy, feedback-laced things. There’s a definite grizzled old ‘head’ hippy vibe, it’s Hawkwind meets The Buzzcocks. The distortion is very nicely handled too, ‘King + Queen Monstrosity’ has very definite shades of the Velvet Underground and Sonic Youth. There’s a lot of atonality, in fact most of it is atonal. And there’s a long feedback outro…which is all pretty impressive in a two and a half minute song.

A couple of songs stretch out. ‘Sandy’s Gonna Try’ heads off into a primitive chug with added space rock FX. There’s some serious motorik monotony to this stoner drone riffage. The lyrics repeat themselves ad infinitum while it riffs out nicely. Final track, the brilliantly named ‘Tractor Beam, Shitstorm’ is a far out 10 minute epic, drenched in background distortion and muddy electronic effects. It grooves along happily on fuzzy rails, full of droning, far-out solos and ‘minimalist’ lyrics…until it suddenly kicks up a gear with a minute to go. It’s a jam basically, but a pretty good one.

Pretty good…that’s what this album is. It’s a confection – short, quirky (I know, I’ve mentioned the quirk before, but that’s what this is). It’ll go down a storm at small, local festivals, when we can have those things again. It’s not ambitious, it ploughs it’s own individual little furrow (which, you expect, Dare has been ploughing for some time). Give it a listen, it’s fun while it lasts but may not be quite vying for position on your ‘album of the year’ lists. 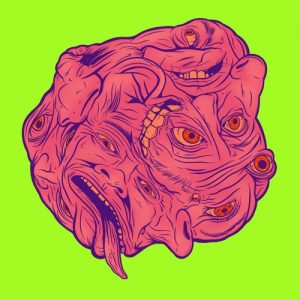