To paraphrase those esteemed future saviors of the world, Bill and Ted – DeWolff are dealing with the oddity of global lockdowns with the greatest of ease. Some bands seem to have gone into stasis, only to be woken up à la Sigourney Weaver in Alien, when all this is over. Some have hidden away in their gold-plated mansions, reclining on their accumulated millions, not even considering going anywhere near us lowly oiks while others…others have adapted to this new landscape, pushed forwards, rethought the music industry and how it works and, ultimately, produced rather fine work. They’re not going under, they’re thinking outside the box to keep, ahem, DeWolff from DeDoor.

Case in point being Dutch psychedelic Southern rockers DeWolff. Hang on, I need to backtrack – I’ve used the psychedelic Southern rockers tag for at least three reviews now (along with that old ‘retro blues’ chestnut) – and it’s just not good enough. They’re not that anymore, they’re something else. What that is exactly I don’t know but the lazy pigeon holing isn’t worthy of them. Yes they rock, yes there are jams and trippy effects and yes, there’s still occasional slide guitar but a whole lotta maturing has been going on, a lot of experimentation and genre hopping so we’ll reconvene at the end of the review and give it all a rethink.

Prolific. They’re that too. ‘Wolffpack’ will be their fourth album in as many years and the grass has certainly not been allowed to grow under their feet. From full on rockers to live albums and last year’s distinctly lo-fi ‘Tascam Tapes’, DeWolff are seekers, questers, hairy knights on a psychedelic mission to boldly go…etc.

And this is a true Covid-era album – conceived, written and recorded partly in their Utrecht studio but mostly over Whatsapp and Zoom, with lots of guests joining in on the calls including, amongst others, ex-Wolfmother bassist Ian Peres and the Dawn Brothers. And rest assured, the austere Tascam ethos has not followed through to ‘Wolffpack’ – oh no, this is a full on cinemascope production. Bells, whistles and (probably) kitchen sinks were all harmed in the making of this album.

So yes, opening track ‘Yes You Do’ (see above) is business as usual – a mid-paced groover with lashing of Hammond and distortion and a very 70’s Purple vibe. The band lock in effortlessly to a funky retro riff that rocks and rolls as well as everything else in between. Confident and relaxed, it’s DeWolff doing what DeWolff, erm, do. As is the fabulously titled ‘Treasuer City Moonchild’. Obviously, it’s glam – the drums are all over this, it stomps bluesily. There’s a cool solo and some great vocal/guitar call and response. It’s Cream jamming with Free while Marc Bolan sits in.

Band leader Pablo van de Poel has clearly dug out his old soul, funk and disco albums over lockdown because we then head into a cool, Atlantic records inspired triptych of songs. We get melancholy love laments, string laden soul/pop balladry, Stonesy 70’s funk, a dash of Northern soul, a smidge of gospel and some Al Green style falsetto vocals. Word.

And on we go, the band clearly hitting their stride. ‘Lady J’ keeps the soul but makes it heavier, it’s anti-discrimination lyrics sitting atop a restless, hand-clap led groove that keeps you on your toes. ‘Roll Up The Rise’ ups the guitar ante with some lugubrious heaviosity – still hard to put your finger on exactly what it is though. ‘Bona Fide’ meanwhile, drags us through the aural mud for some crunchy swamp rock, topped by a sludgy, Hendrix-y outro.

Then we’re back to the funk rock. Horns are added to the mix. ‘Hope Train’ closes the album – inspired by Colson Whitehead’s brilliant, Pulitzer winning novel. It’s scratchy intro sounds like a long lost 20’s field recording but no, it’s all DeWolff – recorded, in a genius move, on an old 70’s Fisher-Price toy cassette recorder to get that authentic lo-fi feel (not that Robert Johnson and his ilk were recorded by Fisher-Price). It lopes along in, er, locomotive fashion before veering off into a fuzzed out conclusion.

This is all good stuff. It may not be DeWolff’s heaviest album but it is certainly one of their most interesting. It’s very cool, very singular and very…well, DeWolff. They’re now doing something very much their own. No one else really sounds like them and it’s become impossible to predict what they’re going to do next – which is always a very good thing. So, back to the earlier issue, how do we classify them? Heavy soul would have worked for this album but Paul Weller beat them to the punch back in ’97 and, anyway, you can bet that whatever they do next will sound nothing like this. So, I guess we’ve moved beyond easy categorisations (which is usually a sure sign that a really good band is becoming great), they’re just DeWolff, and that’s just fine. 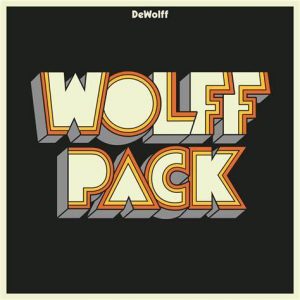