DeWho? You may not have heard of them but ‘Thrust’ is album number eight from this Dutch trio. Still young and full of vim, DeWolff specialise in a Southern rock tinged brand of psychedelic classic rock – they’ve jammed with Ten Years After and both Roger Glover and Seasick Steve count themselves as fans. And no wonder, I suggest you get yourselves up to speed quick, you crazy kids, because on the basis of ‘Thrust’ these guys could be big.

The band lull you into a false sense of insecurity with a couple of good but uneventful riff centric rockers with tips of the hat to Purple and Hendrix. But then things start to get interesting. ‘Once In A Blue Moon’ is keyboardist Robin Piso’s moment in the sun. The bluesy, slow burn ballad segues from jazzy Hammond organ to trippy synths and electronics to plaintiff piano. It leads us into a remarkable run of quite stunning music.

The Southern rock stylings are knowing and classy. ‘Tombstone Child’ references Coverdale/Hughes era Purple with swirly studio trickery and mucho tie-dye panning from left to right. Oh yeah, and big guitars. ‘Deceit and Woo’ is huge – guitar and keys locking together in floorboard loosening harmony. An anti-Trump riff monster, it’s confident and classy, ebbing and flowing, taking quick breathers before working up another self righteous head of steam.

The Drive By Truckers are thrown in to the fuzzy mix, as are Creedence and Crosby, Stills and Nash…with ‘Weld’ era Neil Young guitars. ‘Tragedy Not Today’ is chock full of outlaw attitude, it’s amped up, turbocharged psyche retro badass country – which, after all, is pretty much what Southern rock is all about. And let’s not nit-pick about authenticity here – they’re from the South of the Netherlands – nuff said. Who gave America the exclusive rights to Southern rock?

So there you have it, a strong surprise contender for album of the year. It’s a joy – melodic, powerful, loose and 100% DeWolff. Pour yourself a Jim Beam, kick back and get acquainted with these good ole (young) boys. 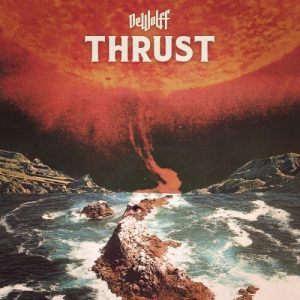