Live albums. A tricky beast to get right. There are only a handful of classics and it’s down to any number of factors. Performance, audience, pacing, circumstance, historical significance. It’s all in there. It’s just a matter of catching lightning in a bottle. Simple really.

Dutch psychedelic blues maestros DeWolff have thrown their hat in the ring (for a second time) with ‘Live & Outta Sight II’…have a guess what their first live offering was called. Following on from their brilliant 2018 studio album ‘Thrust’, this was recorded over their 2018-19 tour of the Netherlands and is a lavish, ‘Thrust’ heavy affair. And what a gloriously retro, jam heavy treat it is.

The sound, from the off, is classic DeWolff – psyche guitars, lashings of Hammond organ, shedloads of groove and a defiantly Purple Mark II beefy confidence. Almost immediately we’re into a jam – get comfortable folks, we could be here a while.

And on we go. Songs follow a blueprint – a big old funk rock riff is introduced before we relax into a noodle and then the aforementioned riff returns for a big finish. By the time we reach ‘Medicine’, the band are stretching out, the solos get longer – pin-drop blues solos soar into crescendos before noodling out again. There are definite ‘Red House’ meets ‘Since I’ve Been Loving You’ vibes here.

‘Tombstone Child’ follows (see above). A great riff, yes? Classy backing singers adding to the Humble Pie soulfulness and yet, it feels slightly restrained. It should be rawer, looser, more joyous. It feels like DeWolff are playing their cards too close to their collective chests, not risking a wig out on a live album. Playing it safe. Still a great riff though.

But hang on. ‘California Burning’ is an urgent leviathan of blues rock riffage. With a Southern twang. And a dash of funk. It fuzzes out into a riff storm and is definitely building up a good head of steam. ‘Share The Ride’ also has that Southern/Country thing going on, it’s very cool genre mixology, the guitar and Hammond duelling to create that classic Duane Allman/Dicky Betts sound.

And then we come to the albums grand statements, two 11 plus minute epics. There is a huge amount of the loud/quiet switcheroo technique and fabulous interplay. The guitar work is warming up, gaining confidence, exploring and taking risks. At one point it howls and then drops out into a void of silence…and the warm embrace of the crowd. Theremin stormclouds approach and you realise that the leash has been slipped, we have lift off!

There are solos – many solos. Guitar, drums, Hammond, it’s all there in spades. ‘Outta Step & Ill At Ease’ is particularly stunning, its Stonesy country lope heading out into cosmic Americana destinations unknown for some major guitar heroics. DeWolff are now completely inhabiting the moment.

We end with 9 minutes of Jimmy Smith style jazz funk goodness, hard rocking jams, maximum fuzz and a great deal of audience participation. Sturm und drang baby. DeWolff are a band who absolutely should be bigger and while this doesn’t quite reach the heady heights of The Who or Lizzy it’s a damn fine live album, better than many. Go forth and seek this out. 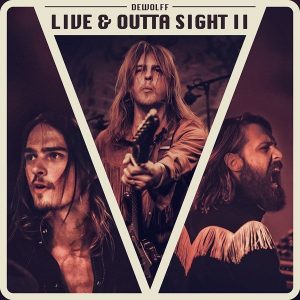