With this concert, Ambassador, you are really spoiling us. Dutch retro rockers DeWolff, to mark the launch of their latest album, ‘Wolffpack’, treated their faithful to a near two-hour free concert as a safe, socially distanced celebration – and we need any treats we can get our mitts on at the moment.

And so, at 7pm sharp, we were whisked away to the Tivoli Vrendenburg and a stage that looked like something from a long forgotten 70’s early evening chat show. Retro lettering, a beige backing curtain, basic white lighting and a mirrorball. The band, for their part, were a riot of paisley, flared collars, facial hair, suede and, oh yes, tan safari suits.

With a minimum of fanfare, we’re off. Guitars are set to fuzz and the band rip through ‘Yes You Do’. ‘Treasure City Moonchild’ is stretched out – a spoken word rap and a spot of scat singing make way for a brief snippet of ‘Keep a Knockin’. We’re barely 10 minutes in and DeWolff are starting to jam. Far out.

And then guests begin to appear. An extra guitarist appears, as does a bass player. Backing singers emerge from behind the curtains to help out with the soulful (but heavier than it’s studio counterpart) ‘Lady J’. ‘Do Me’, one of the stand out tracks from the new album is also much more guitar-centric. Any worries that DeWolff were about to become a blue-eyed soul band are quickly allayed.

Having said that, frontman Pablo van der Poel wastes no time in putting down his Les Paul, shaking loose his flares, lighting up the mirrorball and giving us some serious Marvin Gaye moves for a slinky disco double bill. But fear not, the rock returns in abundance with some bona fide guitar heroics during, erm, ‘Bona Fide’.

And then we come to the guest appearance of the evening. Arthur Akkermans, lead singer of The Grand East, appears, resplendent in a stars and stripes shirt to up the what-the-actual-fuck quotient considerably with a performance that is part Vegas Elvis, part Larry Grayson and all totally OTT. This gig is now officially off and running.

We get more, much more. We get a horn section, we get killer twin guitar Allman Brothers style Southern Rock wig outs, we get back catalogue tracks played at twice their normal speed and we get a crunching version of ‘Hope Train’. There seems to come a moment in most DeWolff gigs where the gloves come off and the band reach for the stars – and this was the moment for this gig, although it does end with that Covid era live stream moment where the band roar to the end of a song only to be greeted by…silence, and the occasional half-hearted whoop from a cameraman or sound guy. It’s a tad awks but also the new normal in these days of live streams.

The horn section return for 2020 single ‘Live Like You’ and then, as Pablo sheepishly says to no one in particular – “well, that was it”. They return for a jam-tastic encore, chock full of Hammond/guitar solo duels and, bar the guests returning to take a bow, that’s it. For a free gig this was incredible value for money, the band giving us a full bells and whistles show for almost two hours. It was a blast and may convert a few new followers. G’wan, there’s never anything on TV these days, give this a watch, you might just be surprised. 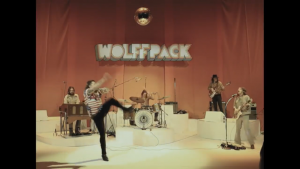 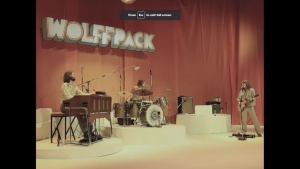