… talent’s just in the genes!

No artist ever wants to spend their career working in the shadow of their illustrious parent, something which Devon Allman (son of Gregg) will surely be familiar with. Nevertheless, Allman Jr has, following a few albums with project Honeytribe, carved something of a name for himself in the blues-rock world with two studio albums and a live set with (also on Ruf) Royal Southern Brotherhood, as well as his solo debut, Turqoise, last year.

Thankfully, the blues- and country-tinged rock of his second solo outing, Ragged & Dirty, has him further stake his claim as entirely his own southern-oriented musician. Stomping opener ‘Half The Truth’ fires things up in a southern rock fashion, while elsewhere Allman honky-tonks his way, Skynyrd-style, through ‘Times Have Changed’ and presents sunny country rock with the catchy ‘Leavin’’. He shows himself a master of funk-injected blues-rock in ‘Can’t Lose ‘Em All’, ‘Blackjack Heartattack’ and the title track, which prove to be the album’s liveliest numbers.

By far the most exhilarating of the tracks is the album’s simmering centrepiece, ‘Midnight Lake Michigan’, an outstanding 10-minute instrumental in which organ, piano, drums, bass and guitar combine to push you through spine-tingling subdued passages and thrilling, heavy peaks. While brilliant pieces such as this serve to hold up Allman as a sensational artist independent of his father, they also lead you to concede that sometimes, talent’s just in the genes. 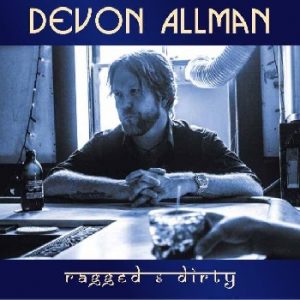