I’ve heard some great albums by bands on the Fuzzorama label recently, so when a band I’d never heard offered up an album, I figured it’d be at least worth a listen. In this case, Deville have actually been around since 2004, and this is actually their fourth album. As a four-piece from Sweden, these guys fit right into the whole retro-stoner-rock vibe of the label perfectly, so right from the opening ‘Make It Belong To Me’ I was rooting for them.

While the sound is, nominally, sludgy, down tuned fuzz-rock, there’s a crisp, shimmery edge over the top, with some floaty ethereal vocals adding their harmonies to the affair. It actually makes it a little hard to pigeonhole, which works in its favour. The guitar and bass are heavy as hell, and the drumming is a blessed relief from the overdone double-bass-drum sound and perfectly underpins the rhythm without trying to dominate proceedings. The tightness of the rhythm section is perhaps most apparent on ‘Life in Decay’, whilst ‘Dying To Feel’ is the very epitome of that crunchy, down tuned stoner rock which we all know and love, replete with thumping riffery and pounding drums. On the whole the album never really delves into flashy guitar solos, either, preferring instead to rely on simple guitar lines and musicianship instead.

It’s an album that bludgeons you with the rhythm while throwing harmony vocal lines at you to keep you off-balance. The excellent production helps keep it all held together so that it never gets so clinical as to lose the roughness that’s part of the appeal of the genre. It’s a very neat trick, and one that will likely serve to broaden the appeal of the album considerably. For fans of their earlier work, everything that you love is still here in spades. The main difference is that the production now really lets the song writing and performance come through. In short, it’s a very decent album, and one that’s well worth a listen. 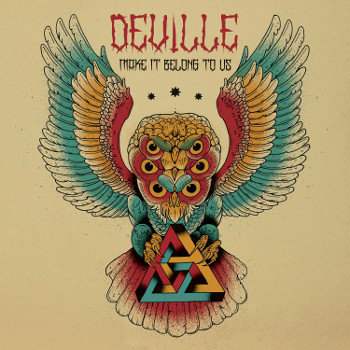 Make It Belong To Me

Out of the Black