What happens if a Brazilian, a Bulgarian and a Chilean meet in Hamburg? No, that’s not the opening line of a politically incorrect joke. Rather it’s a rhetorical question with the answer being an unrelenting thrash fest in the shape of Detraktor. The origin of the band is a little more prosaic with drummer and vocalist Henrique Queiroz and guitarists Rafael Dobbs and Boris Pavlov meeting in Canada. Two EP’s followed along with the acquisition of bassist Juan Orellana and relocation to Germany. It’s groundwork that’s served the band well as their debut full length Grinderarrives almost perfectly formed.

Wasting little time on pleasantries opening cut ‘Parasita’ comes out of the blocks with pedal pressed firmly to the floor. An insanely catchy riff and a drum roll serve as an introduction and it’s all very whiplash inducing as the band race along like a wheel that spins so fast it seems to be rotating backwards. However like much of Grinder ‘Parasita’ ebbs and flows with breakdowns that provide a change of pace and a little respite as the band regroup for another sonic assault. Next cut ‘Not Many More’ continues in a similar vein with scything guitars that cut straight to the bone.Grinderis unashamedly thrash yet it has a crossover feel as it’s a chugging, riff laden affair. In fact it’s not until the end of the second track that the guitars are set free and unleash some fine shredding. A sparseness of solos gives proceedings almost metalcore feel that’s more akin to Hatebreed or Pro-Pain. There’s also a strong groove metal influence with the circular ‘El Sunday’ a prime candidate to ignite pits worldwide while ‘Pride’ spits it’s lyrics forth with a hardcore fury and a punchy sound to match.

‘Let it Bitch!’ is a great thrash instrumental that I’d place in the same league as Megadeth’s ‘Into the Lungs of Hell’. Featuring plenty of shredding that’s underpinned by some powerhouse drumming the song allows each member to demonstrate their style and provides a nice centrepiece for the album. ‘Chupacabra’ brings to mind Brazilian hardcore punks Ratos De Porão and recalls those halcyon days of the ‘80s Bay Area scene and there’s plenty here to keep old school thrashers happy from the gang vocals in the chorus to the heavy duty riffage. However Detraktor are certainly no retro act as evidenced by their contemporary influences but there’s an inventiveness in the production that’s forward facing as the guitars flit from left to right speakers and create a feeling of vertigo with the whole album benefiting from a bold mix. For example, penultimate track ‘Rejekt’ appeared on their 2015 debut EP Sunday Thrash but this rerecorded version, while not deviating too far from the original, shows the band maturing and benefiting from a fuller sound.

Humour has always been an essential ingredient in the thrash genre (think Exodus’ cover of ‘Low Rider’ or Anthrax’s ‘I’m the Man’) and with ‘Don’t You Smoke That Weed’ Detraktor have written an ode to the sweet leaf. Some choice samples intersperse some incendiary thrash and ensures the album ends on a “high”. In Grinder the band have produced a contemporary classic which could well propel them into thrash metal’s premier division. 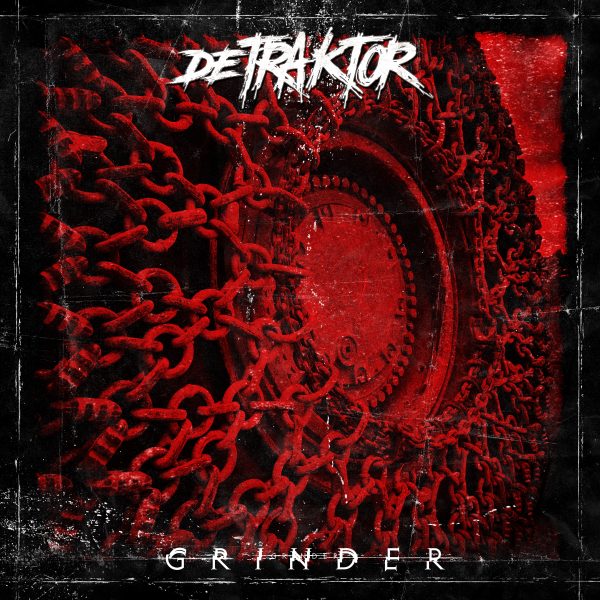