1-2-3-4…no, wait, hang on. Before we charge headlong into this 18 track, 25 minute slab of nearly new vintage (nearly new vintage? Don’t worry, it’ll make sense in a mo) punk glory, let’s fill in some blanks in the story behind this great little album.

Descendents, one of the mainstays of the SoCal punk scene. Formed in 1978, they released their first EP in 1980 and have never looked back…well, until 2002 that is, when the original line-up decided to record their first ever songs, all written between 1977-1980. So, it’s kind of newly recorded versions of their oldest stuff. A ‘lost album’, if you will…except not really lost. Anyway, it’s old songs recorded post millennium.

Great title too, 9th & Walnut being the address of the band’s first rehearsal space. As you’d expect of a fledgling punk bands first attempts at songs, they’re short, snotty, anti-social and a lot of fun – and played by older incarnations of the band with 25-odd years of road experience, so the best of both worlds really.

So, is it cringey listening to dudes in their 40’s playing stuff they wrote when they were in their teens, I hear you cry. Well no, not really, they play it straight, ripping through the songs with affection and no attempt at irony or distance at all. From the 3-chord garage punk blast of opening track ‘Sailor’s Choice’ (“I’m no hippy, no!) to the closing notes of their riotous cover of Dave Clark Five’s ‘Glad All Over’, it’s a joy.

There was something of a template. Most songs clocking in at well under the 2 minute mark. An opening bass riff, into a race-to-the-finish-line charge, chock full of ‘I hate you and everything else’ lyrical ennui and a lot of cunningly hidden melody. Kind of like if R.E.M had decided to cut their own hair and not go for worldwide chart glory.

‘I’m Shaky’ is scruffy rock ‘n roll (“I guess I’m pretty weird to you”) while ‘Mohicans’ has Buzzcock-esque melodic greatness – you feel like you already know it, but, y’know, in a good way. ‘It’s A Hectic World’ nods to the Pistols in it’s riffage while ‘To Remember’ is slightly more jangly and Indie. We also get a belligerent love song in ‘I Need Some’ – it’s The Beach Boys, ’77 style.

So yes. Short and sweet. And angsty. And Affectionate. If you don’t have 25 spare minutes in your life, fucking make the time, turn this up and remember what’s important in life. And get a bit pissed off about something, it’s not like you ain’t spoilt for choice these days. 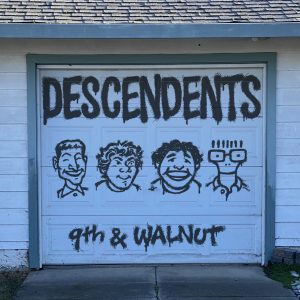