Formed in 2011 with the intent of putting the fast and furious back into thrash it’s a remit Chile’s Demoniac fulfilled with their debut EP (2012’s Judgement Of Death). Since then they’ve released a slew of fine releases culminating in their second long player So It Goes.

Demoniac aren’t a band who mess about and opening salvo ‘RSV-Fool Coincidence-Testigo’ opens with a wall of feedback and proceeds to deliver a masterclass in blackened thrash. Guitarists Nicolas Young and Javier Pereira (who also sings) dual in a neo-classical fashion as their bright and shiny guitar lines cut the air like surgical steel. There’s a definite technical bent as the band stupefy the listener in a musical maze but it’s tempered by a brute force: imagine Atheist colliding head on with Coroner and you’d have something approaching Demoniac’s heady mix. Javier’s vocals are suitably gruff while Rodrigo Poblete’s drums really pound and rise as if from some dark netherworld.

‘Trap’ begins rather sedately with cascading keys but it soon evolves into a beauteous beast that races out of the blocks at 100mph. It’s a smorgasbord of all that’s good and heavy as Poblete’s drums scorch the earth over which the guitars barrel like a Panzer division. Despite being an all out thrasher there’s plenty of invention within its sonic blur that finds neat time changes employed with abandon but there’s a strong focus on structure that keeps everything contained. Woodwind instruments might seem like an antithesis on a thrash album but Demoniac make it work on the ululating ‘Extraviado’. Initially seeming slightly surreal their litheness is revealed as a foil which make the heavier passages even weightier as light and shade wrestle over ‘Extraviado’s four minutes.

It’s back to an all-out thrash attack on ‘Equilibrio Fatal’ as the wheels turn at a furious pace. It’s a neck-snapping, whiplash-inducing affair that places Vicente Pereira’s bass prominently in the mix and he breaks out of the shackles that are normally placed on the bass guitar and goes off on some hypnotic tangents. In a similar fashion to Priest’s ‘Painkiller’ and Megadeth’s ‘Holy Wars’ it’s the type of song that doesn’t want to end as the band find a few new tricks to pull out of the bag. It’s a song that’s sure to transfer well to the live environment and cause all sorts of havoc in the mosh pit.

If you ever needed proof of Demoniac’s invention and desire to push genre boundaries then it’s all here in the (almost) 20-minute closer ‘So It Goes’. Opening rather seductively with an acoustic guitar that gently cascades notes things soon get devilishly heavy as a blast beat breaks the still and Demoniac are off. Thrash metal rubs shoulders with hardcore energy as Javier’s vocals seem to be sung by Satan himself. It’s a song of many suites that constantly shape shifts but the bass acts as a huge anchor around which the band swirl. Throughout the guitars weave intricate patterns over a classic Iron Maiden gallop before an atmospheric final section brings the song full circle.

Having made a name for themselves in their native Chile the time is right for Demoniac to achieve global recognition and, armed with So It Goes, it’s only a matter of time until the rest of the world takes notice. 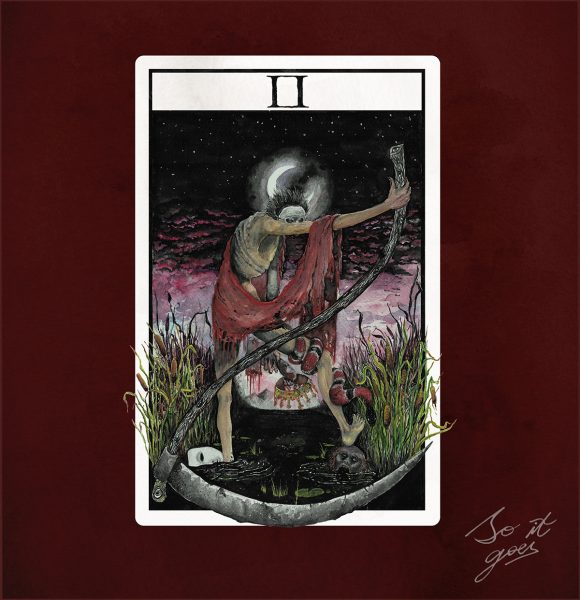