As part of an unholy triptych that finds Cherry Red reissuing all the albums legendary band Deicide recorded for Roadrunner Records, two of their finest releases get conjoined to represent the band at their blasphemous best. Once Upon The Cross and Serpents Of The Light (released in ‘95 and ‘97 respectively) cemented their reputation as principal purveyors of Satanic-inspired death metal, and ones not afraid to take a few risks.

CD1: Once Upon The Cross

A cursory listen to Once Upon The Cross evidences a more measured Deicide who’ve seemingly traded speed for power (but when it comes to Deicide speed is relative, this album still smokes the opposition) and that was an intentional move. After Steve Asheim recorded his drums, they clocked in at a cool 22 minutes which wasn’t long enough for a full album, so he went back and laid them down at a “slower” pace. The result was akin to a hammer smashing face, and no more so than on the opening (and title) track, ‘Once Upon The Cross’. All the essential ingredients can be found here, from Glen Benton’s demonic growl and bowel-loosening bass to the twin guitar attack of Brian and Eric Hoffman who unleash spiderlike solos that move sporadically as if a planchette over an Ouija board. However, it’s the aforementioned drumming that gives the album its edge and the deliberate place allows these other elements to come to the fore.

Listened to straight after Deicide’s previous album (reviewed here as part of the Crucifixation set) Once Upon The Cross finds the band marching forward with a muscular, punchy sound that takes no prisoners. The strong focus that’s channelled into cuts such as ‘Christ Denied’ and ‘Kill The Christian’ only add the overarching feeling of aggression and the warm production given by Scott Burns makes the guitars squeal as if their strings have been soaked in blood. Some choice samples from the film The Last Temptation Of Christ (most notably on ‘Trick Or Betrayed’) add a suitably sinister atmosphere, and if Satan has a house band in hell, then I’m sure they’d sound a lot like the guillotine chop of ‘They Are The Children Of The Underworld’.

Due to the sonic shift that occurred between Legion and Once Upon The Cross, this release divided their fanbase and became a true “Marmite” album. More by accident than design, it became a game changer for both the band and the genre but, unbelievably, better was to come from this crazy crew…

CD2: Serpents Of The Light

The great thing about Deicide is that they give fans exactly what they want; there’s no fancy introduction or other extraneous nonsense, just a bone saw riff and Benton’s unearthly growls to lead us on another journey into sonic extremism. Serpents Of The Light was recorded by the same team as its predecessor, yet it sounds markedly different; it has a far sharper production, the band are back at full pelt and the whole album has a focus like a sharpened arrowhead piercing flesh. From the arctic blast of opener ‘Serpents Of The Light’ to bombastic closer ‘Father Baker’s’ Deicide do what they do best and set about dissecting the listener with razor sharp scalpels (and no anaesthetic) and leave a trail of bloody fingerprints in their wake.

An ouroborous, Deicide thrived of an inner conflict with Glen Benton on one side and the Hoffman brothers on the other. It was a tension that fuelled their fire but on this album you can feel the balance of power shifting towards Benton, and it has altered the band’s chemistry somewhat (a similar struggle occurred during the recording of Van Halen’s Fair Warning). Those unruly, spasmodic solos that illuminated past releases are more controlled than before and subsequently, they lose some of their spark. The thinner production on Serpents wasn’t to everyone’s taste, and musically it doesn’t pack the same punch as Once, yet it gives the album its unique aesthetic and the two albums fit together like different sides of the same coin. The friction that fired Serpents made for an album that seethed with anger and you can feel the aggression pumping from the speakers, which is exactly how Deicide should be experienced.

Never ones to shy away from controversy, Deicide had an image that would strike fear into even the most ardent Satanist and it could have easily overshadowed their music. But once you look past the inverted crosses branded on foreheads, the bombings, arrests and (alleged) animal cruelty you’re left with some of the finest death metal known to man, of which Once Upon The Cross and Serpents Of The Light stand proud.

CD1: Once Upon The Cross

CD2: Serpents Of The Light 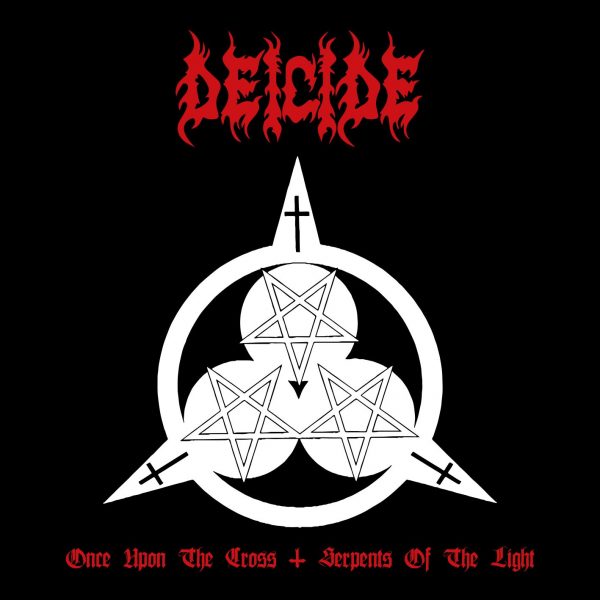