If you feel like blasting away some festive excess with a shedload of death metal hand grenades then Malediction, the latest album from Canadian crew Deformatory, should just about do the job for you.

The Ontario quartet pinned their gut-splattered colours to the metal mast with their opening full length release In the Wake of Pestilence.

This follow-up further showcases their wizardy in whipping up a technical tornado built around the foundations of brain juice extracting drum work, neck chopping riffs and the vocal delivery of a man who’s just lunched on a bowl of rusty nuts and bolts.

‘Infernal Gateway’ sets the wrecking ball in motion with anything or anyone foolish enough to poke their head above the parapet at risk of losing it.

Lyrically Malediction continues from where Deformatory left things on their debut. The soundscape is again built around Saväel, the source of pure evil, the journey this time enters into darker territory still with all humanity ultimately whitewashed from the planet.

Although played with spittle fuelled unbridled aggression, the Canadians just about keep a grip on the reins, combining the runaway riffs with more measured moments such as ‘Dimensions of Malevolence’ where the blows land more steadily but with no less authenticity thanks to some momentous breakdowns.

Tracks such as ‘A Hideous Veneration’ explode the lid on some crushing boneshaking beats that fill the air like a swarm of angry mosquitos. There’s no respite or escape. These muthas aint going back in the bottle once Deformatory set them free.

Closing number ‘Apothic Existence’ begins with a real dirty riff that you just know won’t come off in the wash. The layers of depravity and disease stick like glue with Deformatory.

Originally scheduled for a pre-Christmas release, we’ve been kept waiting just a little longer than planned for Malediction. As they say, the best things are those worth waiting for. 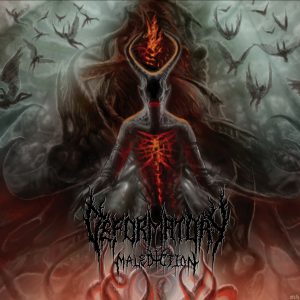