Right, I’ll lay my cards on the table right at the start. I think Def Leppard’s Hysteria is absolutely magnificent and it’s one of my all-time favourite albums. Originally released in August 1987, Hysteria was three years in the making. Along the way there were aborted recording sessions with Jim Steinman, a devastating injury to drummer Rick Allen which would have floored a lesser man and ripped the heart out of a lesser band, lengthy attempts to produce the album themselves in collaboration with engineer Nigel Green before the whole thing was all pulled apart, reworked, reassembled and rerecorded with the production genius of Robert John “Mutt” Lange at the helm. What emerged at the other end was a sonic masterpiece that went on to sell ov20 million copies worldwide and was a number one album on both sides of the Atlantic.

Viva Hysteria is a celebration of that album and was filmed in March 2013 over eleven nights at the Hard Rock Hotel in Las Vegas. Despite the relatively intimate setting, the production values here are very high and the show features an elaborate stage set created exclusively for the Vegas residency. Performing the entire album in sequence allows Def Leppard to indulge in some theatrical touches: Phil Collen descends on a hydraulic platform for the guitar introduction to ‘Women’; a wall of computer generated TV screens forms the backdrop to ‘Rocket’; and although some of the band’s movement around the stage seems choreographed for effect this only adds to an excellent performance.

Def Leppard are in top form here with versions of ‘Armageddon It’ and ‘Hysteria’ particular standouts. With seven hit singles lifted from the album inevitably some of the remaining tracks have long since disappeared from Def Leppard’s live set so it’s good to hear tracks like ‘Excitable’ and ‘Don’t Shoot Shotgun’played live again. For ‘Gods Of War’ the house and stage lights fade to black at the start of the song and the video wall displays Steve Clarke performing the intro to this song. It’s a nice touch. The spirit of Steamin’ Steve runs right through ‘Hysteria’ with a co-write on every track. Gone, but not forgotten. For an encore Def Leppard return to play two songs from their superb Pyromania album – ‘Rock Of Ages’ and ‘Photograph’. It’s worth stressing that the DVD also features two acoustic sets from the band (billed as Ded Flatbird!) with interpretations of pre-Pyromania and post-Adrenalize tracks although this wasn’t available for review.

Viva Hysteria is an excellent presentation of a classic album. It is also, remarkably, the first official live DVD release from Def Leppard to feature Vivian Campbell since he joined the band back in 1992. For me, nothing can compete with seeing Def Leppard in the round at the NEC, or being down at the front on a glorious summer day at Don Valley Stadium in 1993 (that really needs an official DVD release boys!), but The Hard Rock Hotel in Las Vegas looked like a fun place to be in March this year. Hopefully it won’t be too long before Def Leppard return to play in their homeland, or we get to hear some great new music from the band, but until then Viva Hysteria is a hugely enjoyable trip down memory lane. 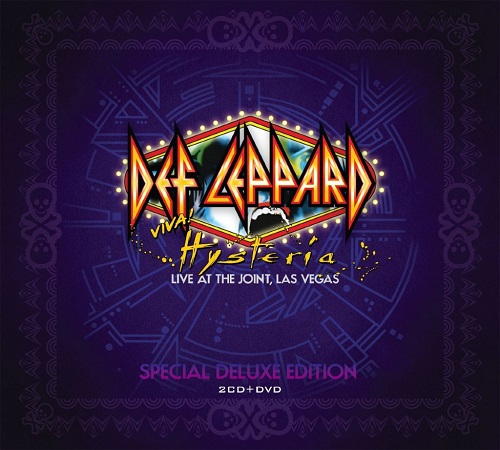