Rarely has the phrase “for your viewing pleasure” been more appropriate. Those kind folk at Eagle Rock are about to release ‘London To Vegas’ – a sumptuous box set including two shows from Leppard’s triumphant 2018/19 tour. One, a greatest hits and deep cuts show from their Vegas residency, the other, a start-to-finish performance of their classic ‘Hysteria’ album from London’s O2 arena. For the purposes of this review, we’ll focus on the London show…cos that’s the one I was sent!

If you’re reading this review on this website there’s not really any need to go into any detail about Def Leppard…Sheffield survivors blah, 80’s groundbreakers etc. Nor is there much point in banging on about Hysteria. It was omnipresent in the 80’s. Inescapable. It virtually defined the sound of uber produced commercial rock for a decade, spawning a plethora of followers. But none, none got it as right as this. The bands commercial savvy and ‘Mutt’ Lange’s production genius created a bona fide mega-unit-shifting classic.

So, how does it transfer to the live arena (literally). Very well is the answer, very well indeed. Aided and abetted by a fabulous live stage show. Lights, screens, costumes and performance all gelled to produce a very special event.

This is a how-to masterclass in presenting a big show. Everything is in place. The intro tape is suitably epic, building to a crescendo that finishes with a somewhat ripped Phil Collen in the spotlight, peeling out the intro riff to ‘Women’. And we’re off, Joe Elliott is in fine voice and it’s immediately apparent that live Hysteria is going to be a much heavier beast than its produced-to-within-an-inch-of-it’s-life studio counterpart. Def Leppard are revelling in the chance to remind those folk only familiar with their 80’s oeuvre that they are a ROCK band.

The musicianship is stunning, this live Leppard roars. The twin guitars of Collen and Vivian Campbell lock in ruthlessly, filling the cavernous O2 with an enormous sound while the Rick’s (Allen and Savage) are a phenomenal rhythm section. It’s slick, polished and never less than thrillingly heavy. Elliott too, is in his element, enjoying himself and working the crowd into a frenzy.

And frenzy is exactly what it is when those first notes of ‘Rocket’ echo around the arena. Retro TV screens adorn the, erm, screen. There is almost a different production theme to each song, from gaudy backstreet neon to anti war images, it’s all here. And it’s all every bit as writ-large and OTT as it needs to be. Yes, there are the occasional moments of pre-recorded tape but how could they do justice to this album without them?

It quickly becomes party time as platinum hit follows platinum hit. ‘Love Bites’, ‘Pour Some Sugar On Me’, ‘Armageddon It’ – need I say more? We also get a moving onscreen tribute to Stephen Clarke, some serious raaaaawk on ‘Run Riot’ and a snippet of ‘Heroes’ during the title track. We finish with a suitably cinemascope ‘Love And Affection’. Elliott thanks the rabid crowd while the band take a moment to soak up the adulation. A great, energetic, professional, committed performance.

And then we’re onto the encore – a 5 song mini greatest hits in which the band seem (if possible) to be having even more fun. The serious bit is over and Leppard really seem to let loose. Campbell tears into the solo on ‘Wasted’ while the final victory lap of mega-hits is a blur of singalong choruses, roof raising guitars and no-expense-spared pyrotechnics.

In terms of both performance and presentation, this is how it should be done. There is a huge amount of band for your buck, this whole box set is beautifully performed, presented and packaged and is a joy to behold. Yes, there is a lot of live Def Leppard product on the market but this is damn near essential. Go on, treat yourself, you won’t be disappointed.

Released on 29 May 2020 by Eagle Rock Entertainment 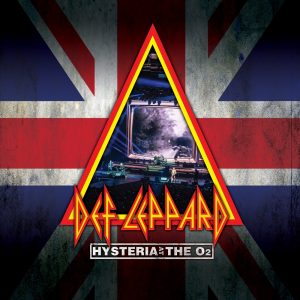