In his latest headfirst dive into the darkened depths of the death metal lucky dip, Paul Castles surfaces with a couple of flying Finns, some Dutch courage and a Mancunian monster.  Here’s his take on the following:

This five-track EP is recommended for any dinner parties you may attend over the next few weeks, especially if granny is coming to tea. Well, then again. maybe not. But then the kind of sick individuals – and I include myself in their ranks – who revel in the putrid ablutions of Foetal Juice are hardly your dinner party kind of folk.

The opening title track is a barbaric ballbreaker of a track with blastbeats that bounce off the walls and kerotene-caked vocals from frontman Sam Read. The Mancunians are not seeking prizes for originality with this 17-minute bundle of narcissm but if the thought of having your brains extracted from your skull and then reinserted  – although perhaps not in quite the right place – appeals then Big Trouble in Little Vagina is your sickbucket of choice. ‘Serpents of the Northern Lights’ is another guttural scab encased volley of venom and vitriol while the final track of five ‘Service Station Masturbation’ is another diseased diamond. 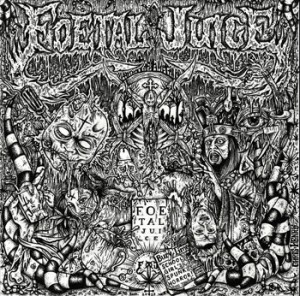 If your idea of headbanging heaven is disturbingly disgusting lyrics pounded out against an incessant diatribe of demented destructon then head to the bar and order your pint of Foetal Juice now – I hope it chokes you.

The Netherlands may not be among the leading European exporters of death metal but Hail of Bullets are at least trying to put the Flatlands on the map. III The Rommel Chronicles is a hand grenade-throwing 10-track album that is infused with battle-hardened tracks from the opening ‘Swoop of the Falcon’ through to the closing ‘Death of a Field Marshall.’

Taking inspiration from the likes of Five Finger Death Punch, and the lesser known but no less worthy Deserted Fear, Hail of Bullets draw their inspiration, lyrically at least, solely from the Second World War. The third full length release from the rampaging Rotterdam five-piece is heavier than a Panzer Tank and every bit as deadly. Any non-believers will be quivering in the trenches, perhaps occasionally sticking their head above the parapet while waving a white flag.

The music is heavy and fast and in the case of the lengthiest track ‘DG-7’, bleak and bloody. ‘DAK’ is another explosive death metal firecracker although it does slow to a doomier riff midtrack that stomps like a weary trooper marching home after a particularly savage day of fighting on the front.

Finland’s Purtenance have released their second full length album just over 20 years on from Member of Immortal Damnation. With two decades stripped from the calendar since their fine debut they should have had time to come up with something pretty damn good, and in Awaken From Slumber they have.

The aptly named intro title track creaks with quaking organ drones, providing an evil entrance before the beast erupts with a 27-second explosion called ‘Hatred’. What follows are some seriously imaginative death metal charges such as ‘Toxic Death’ and ‘Fields of Terror’, the latter a great carcass of rotting meat that sizzles like a burger on the barbecue, spitting out venom at anyone who comes within touching distance.

Harri and Juha are the sole two survivors from the early days but the sound they’ve produced here shows that this Purtenance line-up it is every bit as dynamic and destructive as what went before.

If you caught Children of Bodom on the road recently then chances are you saw their countrymen Mediea on the undercard. For those yet to encounter these Finns then I guess hardcore Hatebreed is roughly what we’re talking about.

The opening title track of their fourth album Iconoclastic and then ‘Waste of Skin’ are slamdunk heavy and you wouldn’t want to be trying to whisper sweet nothings into the ear of your girlfriend in the pit when these guys pull the pin on the grenade. It’s explosive stuff. Although Medeia show a very slightly defter touch with the third track ‘Sleep’ it’s still vein bulging fury from vocalist Keijo Niinima although at a slightly steadier pace. There’s even the addition of some female vocals here but it’s Keijo who really dictates the mood.

Tracks such as ‘Prophecy’ and ‘Misery Prevails’ are serious slabs of meaty menace with the kind of fist-pumping chorus chant that’s sure to be picked up on by pits across Europe in the New Year. Keyboard player Laura is given another chance to add a different dimension with the mic on ‘Loyalty Kills’ but Mediea’s metalcore mayhem is at its best when they’re lighting the fuse. Just be sure to stand well back when they do.