Paul ‘what’s the special word’ Castles gets tied up in knots listening to the debut album from Death Fetishist, released via Debemur Morti Productions on October 28, 2016

For those of a certain age the whole trick or treat thing is little more than an unwelcome US import, a bit like the school prom. For some, Halloween means cutting out one of those signs in the local paper declaring ‘No Trick or Treat Please.’ That may do the trick, so to speak, although if you really wanted to ensure your house was a Trick or Treat free zone a few weeks ago then blasting out the new album from Death Fetishist would have brought about almost guaranteed success.

To say the album starts with some scary stuff is a bit like saying Freddie Kruger was just a fella with long finger nails. ‘The Gifted Minute’ is the eerie intro of Clandestine Sacrament and the whispered words of evil would put the frightners up anyone.

When Death Fetishist actually let rip with the music, on ‘Astral Darkness’ the spirit raging within its charred walls is no less intense. The frantic darting grooves are so diverse you struggle to breathe it all in and when the spiraling sonic swirls kick in against a furious soundscape the whole ‘Astral’ feel suddenly takes on a more vivid dimension. ‘Voidtripper’ takes on an even more distressed shape, angry vocal cries almost lost in a demented twister fueled by contorted riffs and incendiary drum rolls. Oppression levels are racketed right up, impressively so for a debut release.

On closer inspection though it becomes apparent that Death Fetishist are no newbies to this callous and cruel platform of chastening black metal. The band is a two-piece from Portland, Oregon with  Matron Thorn (Ævangelist, Benighted In Sodom) providing the vocals, guitars, bass and synths leaving and Grond Nefarious (Panzergod,  Daemoniis Ad Noctum) to deliver the barrage of blastbeats and all round percussion. 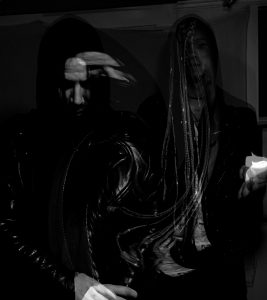 So Matron and Grond have earned their black metal stripes and having come together under the Death Fetishist banner are clearly intent on forging an alliance fired by demonic detonators. Matron is a wide-eyed master of suspense and has created an album in which every depravity box seems to be ticked as Clandestine Sacrament plunges into areas few choose to tread.

While raw to the point of being indigestible, Clandestine Sacrament has a mindset of its own. The black metal heart is infiltrated by ambient sequences that bore deep into the recesses of your mind as an aural fireball turns up the heat to uncomfortable levels. This is so far underground that it never so much as gets a glimpse of daylight. The sound is submerged in a blanket of darkness.

On ‘Beauty from Wretchedness’ a stinging riff razors through the maelstrom like a cut-throat barber speeding through an impatient waiting room full of customers. The flickering female tones come courtesy of Julia Black of Silent Spirit and while they change the feel very slightly the overall ambience rarely lightens and the final stages of the song descend into furious unmitigated chaos.

The fury suddenly relents on the instrumental ‘Verbrannt in altem Morast’ (Burned in old morass) although that’s not to say the tension in any way deflates, far from it. This doomladen eerie keyboard composition casts deathly shadows across the floor. To add further haunting powers, if any were necessary, the synth keys are menacingly played by Jürgen Bartsch of Bethlehem who shares his name with an infamous German serial killer born in 1946.

The songs take on a form of their own, and not a pleasant one, with vast ambient sections of repetitive swoops along the lines of Burzum at times. It’s music to lose yourself to which is just as well, because this album consumes you with very little respite offered. On ‘Wreckage of the Flesh’ the sound is as subtle as a fox being let loose in a chicken coop. The tugging of flesh and spilling of blood could scarcely be better captured aurally, with vocals collapsing into wild indecipherable roars.

By now you’re possibly feeling in need of oxygen although Death Fetishist are not ready to put their rusty handcuffs back in the draw just yet. Instead we get a claustrophobic 12-minute closer ‘Upturneth the Chalice’ a demonic atmospheric platter piled high with blistering vocal attacks, gyrating guitars and drumblasts that rattle your senses.

As for next Halloween, you could always just put the blood red sleeve in your window, that will shift the buggers as well! 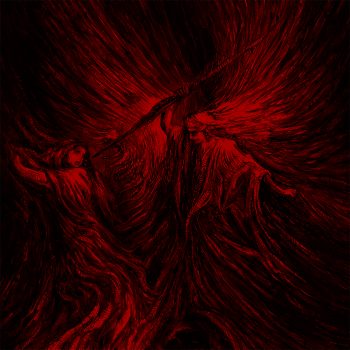