Pivotal in the formation of the classic ‘Bay Area’ sound Death Angel were true pioneers who helped thrash metal reach a global audience. The Enigma Years (1987 – 1990) collects their first two albums, a live set and a disc of rarities in a four CD set which illustrates why Death Angel were (and still are) such a hot ticket.

Disc One: The Ultra-Violence

Death Angel’s debut album arrived fully formed and opening shot ‘Thrashers’ succinctly set out the bands stall and marked The Ultra-Violence as one of 1987’s key releases. A maze of technical riffs anchor the song whilst electric shocked solos are scrawled atop. Those who like their thrash raw and unpolished will revel in ‘Thrashers’ (and indeed the whole album) as it rips along with barely a pause for breath. It’s a sound that’s akin to early Anthrax and melds aggression with dizzying musicianship which renders it very mosh pit inducing. The riff which kicks off ‘Evil Priest’ is a skull crushing affair that quickly gains momentum and snowballs into a rather pleasant thrash fest as Death Angel attack the listener from all angles.

It’s hard to believe the band were all under 20 years when they recorded this album as The Ultra-Violence shows a great deal of maturity. That’s most evident on ‘Voracious Souls’ which inserts acoustic guitars amidst the trash attack, each highlighting the other with their light and shade. The delightfully under-produced ‘Kill As One’ is the perfect vehicle for Mark Osegueda’s vocals and he unleashes some fine ear piercing screams before the shapeshifting instrumental title track allows the band to display their chops over 10 minutes. ‘Mistress Of Pain’ and ‘Final Death’ provide little in the way of respite as the brief ‘I.P.F.S.’ brings The Ultra-Violence to a fittingly frantic finale.

As a bonus this disc contains the three song demo Kill As One. Produced by Metallica’s Kirk Hammett in 1985, a network of tape traders spread the bands sound far and wide ensuring that The Ultra-Violence garnered a great reception. The three tracks here (‘Thrashers’, ‘Kill As One’ and ‘The Ultra-Violence’) are presented in all their embryonic, visceral glory and later to be sharpened on the album. The term classic is now bandied around with reckless abandon but The Ultra-Violence fits the bill and remains a cornerstone of the genre.

Disc Two: Frolic Through The Park

Released barely a year after their debut, Frolic Through The Park is an album that polarises Death Angel fans. In no way a bad album it does have a feeling of being rushed yet, paradoxically, it also shows a great deal of development and incorporates elements of funk that would flower on their major label follow up (1990’s Act III). A rather surreal sound bite introduces ‘3rd Floor’ before the band arrive with all guitars blazing. So far, so good. Armed with a fuller production that brings all the instruments to the fore ‘3rd Floor’ evidences a band willing to take a few risks and, compared to it’s predecessor, it’s a more measured affair. ‘Road Mutants’ is powered forth by a satisfying bass rumble but ‘Why You Do This’ finds the wheels starting to wobble as it veers wildly in several directions.

Guitarists Rob Cavestany and Gus Pepa cited U2’s The Edge as a major influence when recording this album and you can definitely hear shades of his playing in the chiming chords. ‘Bored’ amps up the funk and finds Death Angel a little rudderless but ‘Devil’s Metal’ finds them doing what they do best and sets them back on course. Typical of Frolic Through The Park’s introspective feel the slow and crushing ‘Confused’ finds the band soul searching while ‘Open Up’ and ‘Shores Of Sin’ continue in a similar lyrical vein. A rather rote version of Kiss’ ‘Cold Gin’ sounds like a facsimile of the original with the band failing to put their own mark on proceedings. ‘Mind Rape’ is an adequate closer that mixes mosh parts with faster sections but an all out thrasher (like Exodus’ ‘Open Season’) would have made a more memorable conclusion.

Frolic Through The Park suffers from sounding rushed and a tad too eclectic. The cover of ‘Cold Gin’ screams ‘filler’ whilst the funky flourishes detract from the thrash and dilutes the bands power somewhat. Three bonus cuts save the day with ‘Dehumanization’ being a pummelling affair, ‘Silent Killer’ a prototypical thrasher and ‘Witches Of Knave’ an adrenaline charged rocker that would have made a far better Frolic closer.

By the time the unofficial Fall From Grace was released Death Angel had signed to Geffen Records and unleashed the excellent Act III opus. In fact the band knew nothing of this album until they stumbled upon a copy in an Arizona record store whilst on tour. Recorded at Amsterdam’s Paradiso on 9th July 1988 Fall From Grace is a warts n’ all live album that captures Death Angel at their blistering best. The rockfall that is ‘Evil Priest’ kicks things off in suitably raucous fashion and seems tailor made for a huge circle pit. ‘Why You Do This’ becomes more beefy and muscular in the live environment and is a vast improvement on the version from Frolic Through The Park. Likewise, ‘Mistress Of Pain’, with its twin guitar attack, becomes a dominatrix and ‘Road Mutants’ more driving and direct.

Released without the bands input means that Fall From Grace is a 100% live offering with no overdubs or studio wizardry. Not that Death Angel would need them and ‘Voracious Souls’ reveals a tight band who tackle complex time changes with apparent ease. ‘Confused’ becomes infinitely heavier and sounds like a cross between Overkill’s ‘Skullcrusher’ and Sabbath’s ‘Wicked World’ before ‘Kill As One’ launches a full frontal thrash assault. ‘Guilty Of Innocence’ keeps the pace going and its circular riff whips up a tornado inside the Paradiso. ‘Shores Of Sin’ is another song that blossoms on stage and moves into Maiden territory while set closer ‘Final Death’ builds towards a doom laden ending that weighs extremely heavy.

No live concert is perfect and sterile and neither is Fall From Grace. Sure there’s a few bum notes and the vocals fade out on ‘Shores Of Sin’ but it all makes for an authentic listening experience. Despite being unsanctioned Fall From Grace is a worthy addition to the bands catalogue and is testament to the live power of Death Angel’s original line up.

Back in 2005 Death Angel allowed their stash of archives to be raided and the subsequent album Rarities is a veritable treasure trove that’s drawn from master tapes, demos and cassettes. Opener ‘Vulture’s Nest’ is a medium paced rocker that both swirls and crushes then bludgeons the listener with a monolithic riff while the chugging mid section injects a nice change of pace before ‘The Hurt’ is an adrenaline shot with a twist in the tale. Both tracks reveal limitations of their source and are far from clean yet, as examples of ‘80s thrash, they’re priceless. Taken from the Frolic sessions ‘Conflict Of Interest’ reveals a band set on taking risks and switches rhythms eclectically as Osegueda’s vocals veer into rap metal territory. ‘A Passing Thought’ resembles Sin After Sin era Priest while the funky ‘Elergy’ reveals bassist Dennis Pepa and drummer Andy Galeon as the perfect rhythm section.

Many of these tracks are ‘works in progress’ yet are no less powerful for it as ‘Aspirations’ stomps like Iron Man hell bent on destruction. With a riff Tony Iommi would kill for it packs a serious punch that’d floor even the most hardened listener. Similarly, ‘Dismal’ is another riff heavy number that sounds like an army of Egyptian slaves moving huge lumps of granite while ‘The Morrows Men’, in opposition, displays a melodic streak and almost pop sensibility. Seemingly written under the influence of Manowar ‘Samson’ takes a light hearted stab at those muscle men while ‘Frolic Through The Park’ is a crossover classic that was criminally left of its parent album. ‘Betrayed’ was reworked and became ‘Bored’ and closes Rarities with all fists flying.

Death Angel never entered thrash metal’s top tier and that was primarily to do with timing. Despite forming in ‘82 their debut didn’t drop until 1987 when many of their peers were on their third albums. Nevertheless, they released two of thrash’s greatest albums (The Ultra-Violence and Frolic Through The Park) and the edition of Fall From Grace and Rarities provide the perfect early career overview. If you’re new to the band or you want to give your vinyl a decent retirement The Enigma Years is an essential purchase. 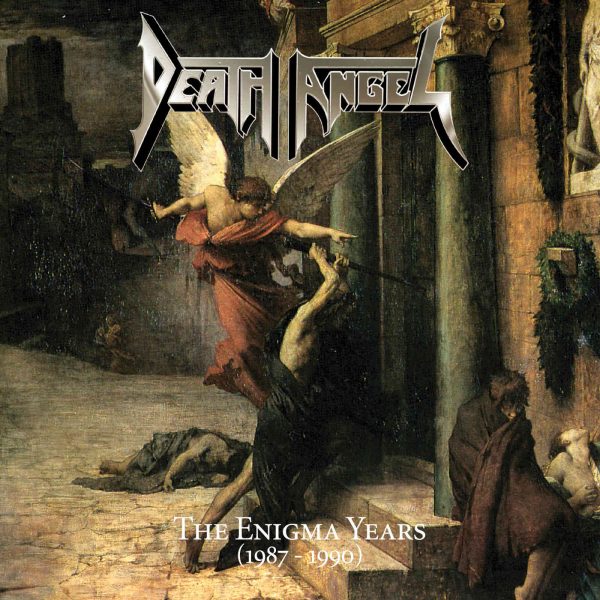 Disc One: The Ultra-Violence:

Disc Two: Frolic Through The Park: