Featuring Dave Lombardo (ex-Slayer, Suicidal Tendencies, Misfits), Justin Pearson (The Locust, Retox) Michael Crain (Retox, Festival of Dead Deer) and Mike Patton (Faith No More, Tomahawk, Fantomas, Mr Bungle and many more), Dead Cross has one of those line-ups where it would be easy to blurt out that appalling appellation “super group”. But super groups are planned, super groups have a plan, super groups come together and then make the music and then do a tour and then kill each other. Or split up or something.

But no, not this lot. Shows were scheduled before a single song was written, and fans were ready and waiting and salivating like Pavlov’s pets before even one show was played (I know because I’m one of ‘em). And then, album written and recorded, original vocalist Gabe Serbian (also of The Locust and ex-Retox) left the band. And then Mike Patton joined and everybody shit themselves. What was already great just got greater. Potentially. The proof of the shit pudding is in the shit-eating grin it produces, after all.

‘Seizure And Desist’ and ‘Idiopathic’ both explode in a flurry of hardcore fists and fury with Patton punctuating the pandemonium with his customary unpredictable screaming, singing, shrieking, vomiting and throat-tickling terror. ‘Obedience School’ hits hard with punk-fuelled ferocity. The aptly-titled ‘Shillelagh’ – the name of a thick stick of blackthorn or oak used in Ireland, typically as a weapon – pummels. What next? A cover of Bauhaus’s ‘Bela Lugosi’s Dead’ of course, and a chilling one at that.

‘Divine Filth’ sounds like something Fantômas might do were they compelled to write such a long song (2minutes 19seconds) with lyrics. ‘Grave Slave’ has the band smashing the shit out of their instruments for two minutes of controlled chaos. ‘The Future Has Been Cancelled’, the riffs twisted, the drumming frenzied, is raw and manic. ‘Gag Reflex’, at 4minutes 21 seconds, is the longest track here and sees the band taking the road nobody would dare travel. And then comes ‘Church Of The Motherfuckers’, the best track here. No words work to describe it. You’ll have to hear it.

That Patton joined late in the day, writing his own lyrics and recording his vocals over already recorded songs, is barely noticeable. There is the odd occasion when the instrument hitters and the mouthy noise maker feel a little out of sync but they are few and far between. This does actually sound like a band. Okay, I’ll say it: this group is super. And the album is super too. 10 songs in 28 minutes. Patton’s vocal work is outstanding as always, but the music that Lombardo, Pearson and Crain put together before he joined needed someone of his calibre to do it justice. With a bunch of shows across North America in August, this lot better come to Blighty for a few shows or a lot of peoplewill be, ahem, dead cross. Okay. I’ll get my coat… 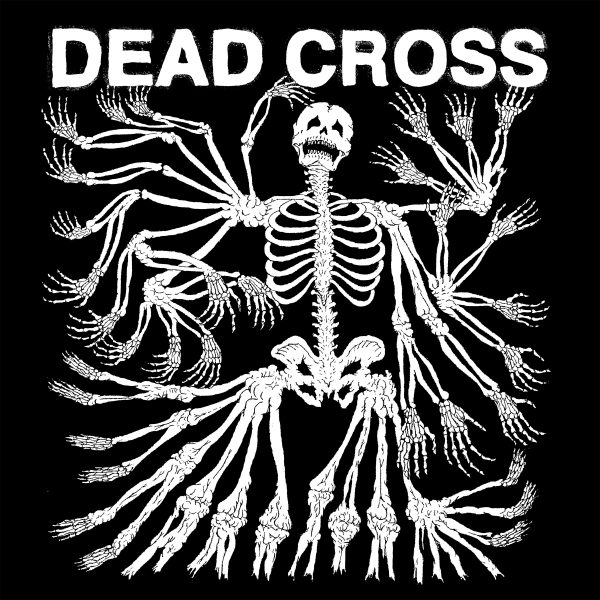