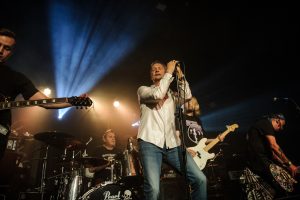 Birmingham’s Dawn After Dark have confirmed plans to release their debut album during 2021, some 32 years later than originally planned. The groove laden rockers reformed for a one off gig last year supporting Balaam & The Angel and encouraged by the response are heading into the studio thanks to a fan funded project that for £30 will see contributors rewarded with a unique T Shirt and an invite only gig on a Saturday night in Birmingham at a venue and date to be confirmed.

It is not too late to get involved in contributing towards the bands recording costs and the £30 can either be paid as a one off sum or in six monthly instalments. For more information and details on how to get involved head over to the bands Facebook page :-https://www.facebook.com/dawnafterdarkofficial

Alternatively, drop them an email at dawnafterdarkhq@gmail.com 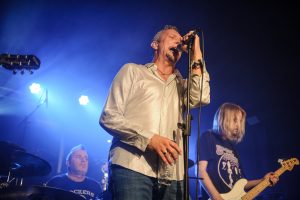 Well known on the club circuit during the late 80’s, Dawn After Dark gigged with the likes of Dogs D’Amour, Kings X, Living Colour, Field Of The Nephilim and Wolfsbane. Signed to the independent Chapter 22 label their recorded output spanned just three 12-inch singles; ‘Crystal High’, ‘The Groove’ and ‘Maximum Overdrive’. Plans to release their debut album in late ’89 were shelved when the band parted company with lead vocalist H and they split up for good soon after. Three decades later H and drummer Tony Henderson reunited along with Henderson’s son Felix on bass and guitarists John Wilcox and Russ Frame. This latest development ensures fans can finally look forward to Dawn After Dark’s debut album becoming a reality.