Perhaps (unfairly) best known for playing with Dennis Stratton in Remus Down Boulevard Dave Edwards has a reputation that far exceeds his recorded output. Collecting tracks from a variety of bands spanning almost 40 years, the aptly titled Many Rivers showcases Dave’s unique talents and, with his powerful magnetism attracted some of rock’s biggest name, renders Many Rivers a veritable who’s who.

Dave Edwards is one of those rarefied guitarists who has a unique tone; just a few bars and you immediately know that it’s Dave bending the strings. It’s a signature sound that I term “liquid treacle”, it’s lustrous, thick and sweet as you like. That’s not to say he’s generic, far from it, and Many Rivers takes in everything from metal to the blues via AOR. Two cuts from British Isles open this collection and featuring two members of Rory Gallagher’s band (drummer Rod de’Ath and keyboardist Lou Martin) along with bassist Chris Glenn (SAHB, MSG) they were the very epitome of a supergroup. However, it’s Dave who’s the real star and he brings ‘Maybe This Time’ to life with his oak-aged vocals and his guitar work that tails the song features the kind of solo you wish would continue in perpetuity.

This disc runs in a largely (by not exclusively) chronological order and after British Isles came National Gold (the second incarnation of which featured the Groundhogs’ Clive Brookes on drums) and they were definitely tapping into the prevailing NWOBHM aesthetic. Some of these recordings have been salvaged from old cassettes and reel to reels, and while the CD can reveal the limitations of these sources the give tracks like the bluesy ‘Never Want To Hear You Say Goodbye’ a rough hewn charm while ‘Love Won’t Fool Me Again’ sounds exactly how a hard rocker from 1981 should. A year later found Dave fronting the Gerry McAvoy Band and lending his silky tone to a cover of Jimmy Cliff’s ‘Many Rivers’. It’s the perfect song to showcase Dave’s deceptively simple style and neat little inflections will surface on subsequent spins.

The band JoKev were a power trio which found Dave updating his sound for the ‘90s and heading in a distinctly AOR direction. That focus on melody and song structure that’s underpinned his career is brought to the fore and the two tracks featured here have a Journey/Toto feel and ‘Feels Like Ice’ wouldn’t sound out of place on a Rocky soundtrack. Fast forward a decade and Dave explored some roots with Three Piece Suite and the track presented here, ‘Railway Station’, finds his guitar sparkling like stars in a crystalline sky. 2017 found Dave hooking up with bassist Vince Riordan and guitarist Micky Geggus of the Cockney Rejects in the explosive TNT. It’s two tracks from that band that curtail this disc and finds Dave standing toe-to-toe with the aggro merchants and the two pronged guitar attack has certainly brought out an aggression in Dave’s playing and makes for a fitting finale.

In an age of vapid celebrity that values style over substance it was easy for the humble and understated Dave Edwards to get looked over in favour of more flashy players. Many Rivers is a collection that highlights his unique talents and should gain him some much overdue respect beyond those “in the know” and into the wider community. 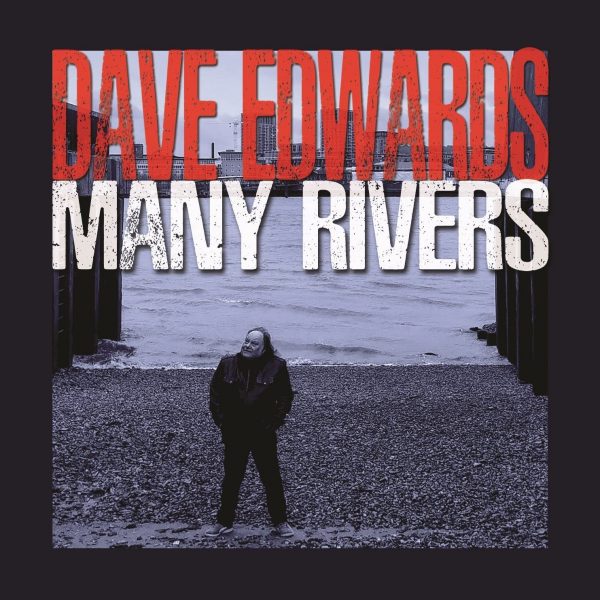