A Frozen War is the follow up to the debut album by the Israeli composer and producer DarWin (that is genuinely how it is written), Origin of Species, released in early 2019. The debut was a concept album, examining the environment and the state of the Earth, and this follow up continues the theme. Before looking at the music itself, we should look at one issue, namely the length of the album, only just over half an hour in total. Bearing in mind that this is described in all the publicity as an ‘album’, rather than say, as an EP, and accepting all the arguments about quality over quantity, a record should be as long as it needs to be, etc, and without listing all the classic albums that are a similar length, the fact that this is a follow up does make it feel rather more like a PS than an album with its own separate identity.

The other thing that immediately strikes you, even before you play it, is the very high quality of the personnel involved. Not only are stellar drummer Simon Phillips (Toto/The Who/ Jeff Beck/Michael Schenker Group) and bassist Matt Bissonette (Dave Lee Roth/Ringo Starr) the main collaborators, there are also contributions from Billy Sheehan (Mr Big/Winery Dogs/Steve Vai/Sons of Apollo), guitarists Guthrie Govan (Asia/Steven Wilson/ Aristocrats) and Greg Howe (part of backing bands for, among others, Michael Jackson, Justin Timberlake, Enrique Iglesias, Rihanna, and Christina Aguilera), keyboard player Derek Sherinian (Dream Theater/Black Country Communion/Sons of Apollo) and many more. That is some serious muso power by anybody’s standards.

So, with all that firepower, how does the album sound? Opener ‘Nightmare of my Dreams’ opens quite sombrely, before a metal vocal intrudes, instructing the listener to ‘Waken Up! Waken Up!’, and we then get a prog metal section before an instrumental mid-section with strings that sounds like something from a Jon Anderson album. This is a track that doesn’t like to stand still for any length of time. My information doesn’t include which musician plays which part, but I suspect the incendiary guitar solo is by Greg Howe, and it’s really, really good.

‘Future History’ continues along those lines, reminiscent of Spock’s Beard or even Flying Colors, as does the next track, ‘Eternal Life’, which also has another terrific guitar solo. For all its serious subject matter, there’s often quite an upbeat atmosphere about the album, making it very listenable, and the writing is really impressive. The title track has its heavier parts, but it flows easily from one section to the other, and this all makes it very accessible. This applies even more to the closer ‘Another Year’, which is almost light-hearted.

While the album is available on CD etc, there’s also a double vinyl edition, complete with gatefold and poster, where the second disc includes different versions of tracks from both albums all rearranged and remixed by Simon Phillips

It’s a pity this isn’t a longer record, unless the intention is to leave you wanting more, in which case job done, it did make me want to investigate more of DarWin’s work. Followers of 21st Century Prog will find a lot to enjoy, including the high class playing, and while it covers some serious subjects, there’s never an air of preaching or doom-laden sermonising, letting you appreciate it on whatever level you choose. 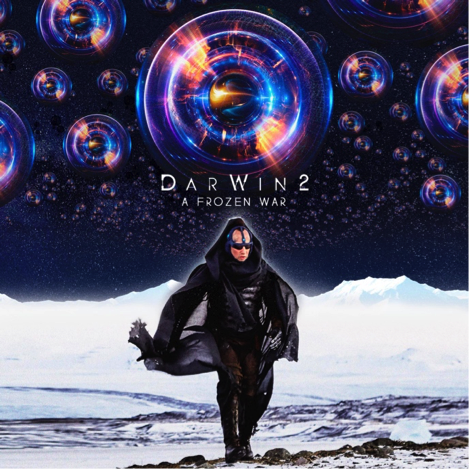