Just look at the artwork and you will know exactly what to expect: fine heavy metal with reminiscences of medieval times, melodic tunes, knights, fights, armour, dragons – you name it. Still, they don’t have to be unpredictable to please the fans of the genre. Dark Forest’s fifth studio album, Beyond the Veil, is classic heavy metal inspired by folk and medieval music. It is very well instrumented; lead singer Josh Winnard delivers clear vocals in the best traditions of the Scandinavian progressive and power metal (and could even be compared to the likes of Europe and Stratovarius).

They know how to get your attention. The opening track is very well composed: perfect intro to what is overall a very good album. It is hard, melodic, lyrical, carries a subtle taste of Iron Maiden’s good times. Totally appropriate start to the CD with the potential to convert a casual listener into a fan. Unfortunately, I don’t find the rest of the album to be at the same high standard, but it is nevertheless a pretty good listen as it is. Here you will find symptomatic features of the genre, for instance ample abundance of medieval power metal intros, speedy and energetic, in the best traditions of Hammerfall (in ‘Where The Arrow Falls’, ‘Blackthorn’). What is also to be expected is the typical changing pace halfway through a track: deceivingly lyrical opening followed by explosive power metal guitar rhythm (‘The Wild Hunt’, ‘Earthbound’).

What doesn’t quite cut it for me are some of the vocal parties (let’s take ‘The Wild Hunt’ as a prime example). I don’t find it convincing either when the lyrics don’t quite fit the melody, so the singer needs to drag the notes on to make them match the tune. Other than that, the lead vocalist is good and makes it all work for the band. The idea to introduce a female vocal in ‘Beyond The Veil’ makes a positive change to the dynamics of the album. I am not too sure about the harmonies of this chorus though; it leaves a bit more to be desired but is certainly a good effort.

What I find particularly charming about this album are the acoustic episodes, and I would have loved to see the band explore this avenue further in the future. The 1:07 instrumental ‘Lunantishee’ is pure heaven. An acoustic guitar track, romantic, soaring, angelic, it is one to rewind again and again. ‘Ellylldan’ is another lovely acoustic, medieval style solo. It is ever briefer: only 58 seconds, and leaves you longing more. The CD contains one more instrumental, ‘Men An Tol’, which would do even Joe Satriani the God proud. Paired up with perfect acoustic solos (‘Earthbound’), these instrumentals make me optimistic about Dark Forest’s future. Overall, thumbs up guys… And when is the tour? 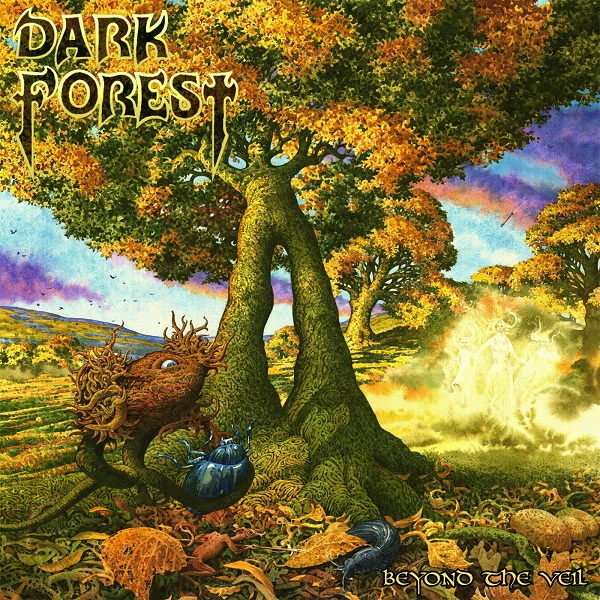