The second solo album from Midlands-based rocker Daniel Trigger, Army Of One feels like a continuation of his first, Infinite Persistence. The established sound he fixed with that album – modern rock influences like Alter Bridge mixed in with old school British metal influences is again ever present throughout. Which is a great thing as his previous work with the Trigger band was very eclectic stylistically and the albums tended to suffer from inconsistency. I wouldn’t say Army Of One is better than its predecessor, but it is very much on par quality-wise and any of these songs would have sat comfortably on it. So if you enjoyed Dan’s previous album you’re sure to enjoy this strong follow up.

Dan has s very fixed focus on how he wants his music to sound and especially in his guitar playing that strong desire for a contemporary modern rock edge is obvious. It does make the music quite dark with down-tuned guitars and grunge-style instrumentation at times, but given his inspirations and eclectic musical background he does layer in a lot of keyboards, vocal harmonies and potently melodic choruses to give the album some freshness and light.

The title of the album I find quite fitting with the lyrics as many of the songs have a real inspirational and rousing “I won’t give up”, fight-song quality to them. I’ve always found Dan to be a decent lyricist and here he hits the mark more often than not. Ironically, it’s my personal favourite song ‘Remember When’ which is the only track which could be criticised for its lyrics. Yes, it is a tad cheesy but I love the sentimentality and emotion behind it and that makes it stand out for me. Although Dan has found a defined sound, ‘Remember When’ does see him harking back to his stadium rock roots; it is different but sits on the album nicely. Given my own personal tastes, it’s no surprise this beautifully melodic ballad with its intricate guitar lick hook and its lighter-waving chorus gets right under my skin and hitting repeat on my stereo.

If you find your tastes leaning more towards today’s commercially successful rock acts but still have a love for old school metal and strong melodic sensibilities, you should definitely check Army Of One out. And if you’ve already heard Infinite Persistence and enjoyed it, you can buy this one with confidence. 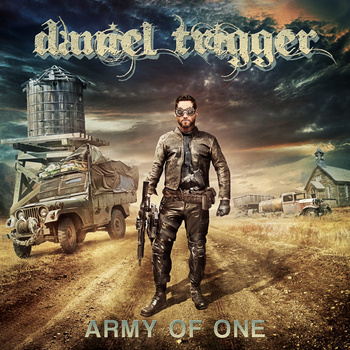