The excellent Dan Reed paid, what I think is, his fourth visit to the UK in 2016, including solo shows and with the Dan Reed Network, but this time to play some solo acoustic shows. The tour arrived at the Iron Road in Evesham on a somewhat wet and windy Saturday night and succeeded in drawing a very healthy crowd.

There was a support for the show, but other than finding out they were called 3-Sixty Lite, a duo comprising a singer and a guitarist. I found out nothing about them on the night, as they weren’t introduced, nor were they that informative in their stage announcements, other than announcing the songs and exchanging jokes with people in the crowd. However, it transpires that 3Sixty-Lite are an acoustic rock duo and a side project of songwriting partners Mark Grimmett, the singer, and Nick Singleton on guitar, from classic rock band 3Sixty. It turned out to be a really enjoyable set, as Mark Grimmett has a good strong voice, and some of their songs were very good indeed, particularly ‘Stronger’, about which Dan Reed himself had some nice things to say during his own set. I would definitely like to hear the full band in action if this is a sample of what they can do. 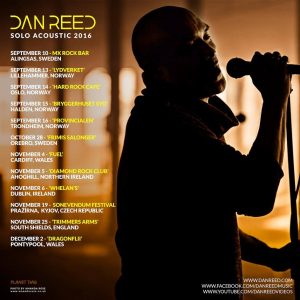 This show took place a couple of days after the death of the great Gene Wilder, and Dan Reed opened his own set by dedicating his song ‘What Dreams May Come’ to his memory. The song was originally about the death of Robin Williams in 2015. It’s a sad topic to begin a show, but it’s such a good song, it set the tone nicely for the rest of the set. This was followed by ‘Champion’, a song from the new Dan Reed Network album Fight Another Day; their first since reforming and their first collection of new material since The Heat came out in 1991. That marked the end of the structured part of the set, as he couldn’t resist the temptation to start taking requests from the crowd. This began with a quite glorious reading of ‘Brave New World’, and moved through ‘All I Need Is You’, before one of his regular covers, ‘Holy Diver’. This format gives you the chance to take in Ronnie Dio’s lyrics properly, and what is already a classic song gains a new dimension.

At this point it was so hot in the Iron Road, he was having trouble keeping his guitar in tune, but to be frank, this didn’t seem to matter when he moved onto songs from the Network. ‘Stronger Than Steel’ had the crowd singing along, but this was even overshadowed by the ever popular ‘Rainbow Child’, which never fails to go down well. The Network songs were undoubtedly the most popular requests, and even if he hadn’t rehearsed them beforehand, he was quite happy to try and improvise, as he did with ‘Long Way To Go’ and ‘All My Loving’, which he sang a capella, seemingly without missing a beat. He ended the set with ‘Mix It Up’; a song with passionate yet cynical lyrics in which he sings almost a capella. I confess it I found it darkly amusing at the end, when the lyric includes the slogan ‘Drink Beer – Get Laid!’ one punter shouted an approving ‘Fuck Yeah!’ apparently not knowing that the next line is ‘That night his only friend was a razorblade’.

Whether with the Network, his ‘Snake Oil’ shows with Tyketto’s Danny Vaughn or his own solo gigs, he’s always a welcome visitor to our shores, and you’re always guaranteed see a different and still hugely entertaining and enjoyable show every night.