South African guitar hero Dan Patlansky releases his 8th studio album, ‘Shelter Of Bones’ this week. Three years in the making, this has been a labour of love for Patlansky and may well be his best yet.

Patlansky really started to make waves with 2014’s ‘Dear Silence Thieves’ and has continued to hone his craft since then to the point where he is now a major player on the blues rock scene, marrying his formidable Strat chops to a keen sense of melody and songwriting skill.

Patlansky knows what he’s good at and pretty much sticks to it here, while managing to refine his sound and throw in a few mild curveballs along the way. But fear not, funky blues rock is his forte and it’s here in spades.

We get off to a thumping, rocking start with ‘Soul Parasite’. It’s full of that valve busting, overdriven Strat sound beloved of Stevie Ray Vaughan, but with added oompf. The tone is greasy, gritty and unrestrained, the song is as much rock as it is blues, if not more, and it pounds its way towards a freewheeling solo. We may have had a four year wait but Dan is back with a vengeance.

The blues makes a full-fledged return with ‘Snake Oil City’. Hammond organ joins the fray and leads the track off into a loose, jazzy, twanging mini jam session, the band stretching out and hitting a formidable groove. This is confident, forceful stuff.

And then we’re off, into an album that mixes bluesy rockers with affecting ballads and slow blues. Of the former ‘Selfish Lover’ is a standout, a funky, stop-start riff dukes it out with an abandoned Hendrix solo and raw vocals that recall Chris Cornell. ‘Devil’s Dopamine’, meanwhile, recalls Stevie Wonder…if he was backed by Extreme.

On the mellower side we have the brilliant ‘I’ll Keep Trying’, a ballad that fuses haunting piano with Knopfler-esque guitar flourishes. Indeed, it becomes increasingly Dire Straits-like, recalling ‘Brother In Arms’ before accelerating off into an altogether hotter, howling solo.

The album ends with the title track, a song written for his children and something of a departure for DP. It’s piano-led. There is guitar in there to add colour but it’s a tool, not a be all and end all. The song is key here, and emotionally powerful it is too.

This is another triumph for Patlansky. It’s almost a new ‘best of’ – it has the six string prowess (in abundance) but, most importantly, it has the songs, they are what’s important. The song has always been paramount for Patlansky – god knows he has the guitar skills, he doesn’t need to show them off every two minutes, but he knows that without the songs, the solos mean nothing and this may well be Patlansky’s best collection of both yet.

Released on 25 February 2022 by Virgin Music 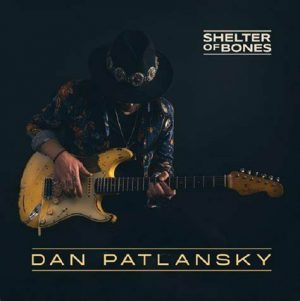