Shoot for the moon…

This month sees the return to the fray of South African blues singer/songwriter/guitar hero Dan Patlansky. ‘Perfection Kills’ is his ninth release but only his third since he decided to make his presence felt over here with the brilliant ‘Dear Silence Thieves’. This album, recorded in his home town of Pretoria, also sees Patlansky shouldering the mantle of producer.

So, what changes are being rung this time around? His previous album, ‘Introvertigo’, added grit and guitar pyrotechnics to ‘Silence Thieves’ laid back, song-centric approach and ‘Perfection Kills’ appears to be a consolidation of the two. Strong songs are still crucial here but not at the expense of a good guitar wig out.

Three songs in, however, and you begin to panic. Sure, there are greasy Hendrix-isms aplenty and melodic licks – the guitar work, while being as sterling as ever, is more restrained, clearly somewhat reined in from ‘Introvertigo’. ‘Mayday’ sways lushly and sings of luuuurve, the Knopfler style solo never overshadowing the song. But there’s been little in the way of blues, in fact, it sails dangerously close to the coast of soft rock.

But, the cavalry arrives, Patlansky rallies and spends the rest of the album dropping funk blues midget gems, chock full ‘o flamethrower solos and loose grooves. He firmly re-establishes his blues credentials with the slow burn of ‘Judge A Man’, while lead single ‘Dog Day’ (see above) is the album in microcosm – groovy, emotional, melodic and raw, topped with a soaring solo.

Yes, emotion, let’s get back to that. Patlansky is clearly a performer who wears his heart on his sleeve. He can be tender (as in ‘My Dear Boy’ – an ode to his new son) or a pissed off storm of self-righteous indignation. It’s one of his strengths, he never relies on easy blues clichés, yet his often autobiographical songs manage to bring blues themes and concerns wailing into the present.

Patlansky has said that the title of the album illustrates his current theory that the quest for perfection can be destructive and suffocating. Hopefully this doesn’t mean that he’s happy to coast. Yes, the pursuit of perfection can be futile but then again there’s nowt wrong with aiming for the stars now and then. Just ask The Beatles or Steely Dan – studio obsessiveness can yield rather fine results. This is a good album but sadly not his strongest, it’s a little patchier, it’s the sound of a good artist on a holding pattern. There’s not the level of progression heard in his previous releases and that’s a shame. Having said that, there’s still a great deal to enjoy here, he’s a good writer, an incendiary live performer and still the most interesting and individual of the current blues crop. The new songs will come to life on stage. 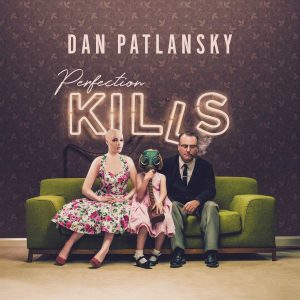