There once was a time when metal and punk were mortal enemies. I always thought that was ludicrous; being two energetic, anti-authoritarian forms of music they had much more in common that just noisy riffs and when Motörhead started playing with punk aggression and The Exploited incorporated metal chops, things would never be the same again. Existing somewhere in between are Edinburgh’s Cuttin’ Edgewho’ve put metal and punk in a blender and the resulting album Face Down is a no-nonsense artillery shelling that effortlessly straddles the both genres.

Scything guitars and crashing drums herald the arrival of ‘Play It Loud’ and it’s a call-for-unity statement of intent. It clearly lays out the bands manifesto; gruff vocals, pounding beats, blistering solos and a rumbling bass all combine in a heady brew the band aptly describe as ‘Motörpunk’. The unusual but catchy gang vocals sweep ‘Play it Loud’ along on a wave of effervescence that’ll net even the most cynical music snob. There’s something very Overkill about the introduction to ‘False Advice’ but it’s used as a springboard to something original rather than being any nefarious Xeroxing. With a full sound there’s a nice raw beat to the drums that powers the song forwards with the force of an unstoppable locomotive.

Attacking like astreet gang and razor sharp ‘World Away’ arrives with a metallic sheen on the guitar and a boot in the bass. Despite their rage and sonic fury there’s a strong sense of melody underpinning the tracks on Face Down. Dig beneath the musical maelstrom and you’ll find a neat tune tethering the band to a grim reality. ‘Face Down’ is the worthy title track and finds Cuttin’ Edge easing up on the throttle for a more punchy, measured affair which swings like a huge wrecking ball. The football chant backing vocals add a nice depth   and atmosphere before the spell is broken by the sirens that accompany ‘Accident Emergency’ and with its flailing guitar solo it’s sure to transfer well to the live environment.

Formed in 2018 Cuttin’ Edge have come a long way in their short history and it’s an urgency they’ve transferred to their debut album as Face Down rarely pauses for breath. ‘Genocide’ captures the essence of the UK82 sound while the following ‘Religion’ takes a darker route for a damning, bleak treatise. It is foot back on the pedal for the white-knuckle ride that is ‘Only The Strong’ before ‘How Do We Know’ brings the album to a suitably raucous conclusion and, as if a tornado passing through, Cuttin’ Edge have left a trail of destruction in their wake.

Fans of The Exploited’s The Massacre, Blitz’s Voice of a Generation and English Dogs’ Invasion of the Porky Men will find a spiritual home with Cuttin’ Edge yet the band have been wise enough to put their own stamp on the punk/metal crossover. It’ll equally please metalheads and punks and it’s broad (and authentic) enough to attract other braver souls too. 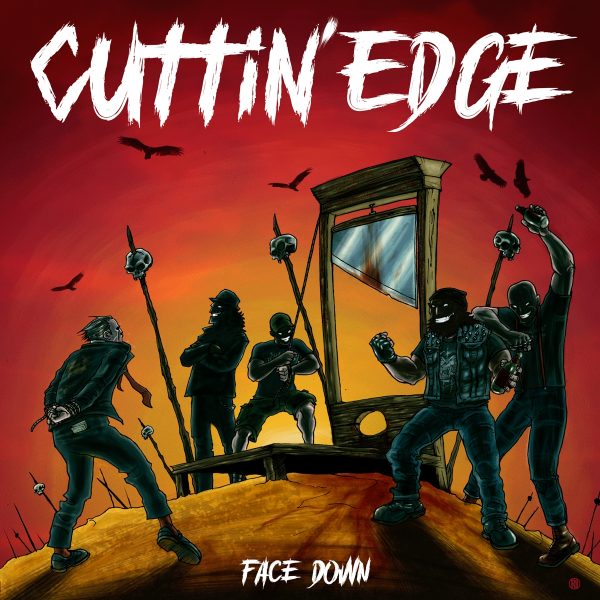