Do you know the way to San Jose… Well even if you do it may be best to give the sun trap a wide berth if Cult Graves are anything to go by. The Californian crushing crew have an insatiable appetite for the dark and the depraved as opening shot ‘Abomination Rites’ quickly makes apparent with its almost primal attacks and buzzsaw guitars that can cut through you as soon as look at you.

It’s a rattling start and nor does the mood lighten as they kick up a sonic sandstorm on the likes of ‘Necrophidious,’ which is a kind of giant death worm/snake beast, which is utterly appropriate as once Cult Graves get you in a hold it’s almost impossible to wriggle free.

This album is actually split in two, the first four tracks under the Strange Customs header, were initially released as an EP. The final song is ‘Cruor Upheaval’ which has the kind of jarring repetitive ending that’s got the potential to inflict some kind of involuntary tic on an unsuspecting listener.

The following five nose-breakers are from a previous demo. First of these is the punishing ‘Ritual Suicide’ and the intensity remains ferocious, only briefly easing off the pressure to inject an eerie ambience to ‘Astral Hauntings’ with the raging ‘Bloody Nose’ pretty much as described on the tin.

As the band’s very name suggests these barbarous blasts are so underground you almost have to dig them up to listen to them. No quarter is given, as the blood-spilling bludgeoning swings from track to track, the pummeling drum blasts rattling your senses as though you’re trapped in a washing machine on full spin.

Total listening time is around 37 minutes which should be enough even for the most hardened death metal brutalist. If the likes of Deicide, Morbid Angel and Autopsy get you out of bed in the morning then you’ll not be disappointed by Cult Graves, although bring your own sandpaper to smooth off those rough edges. Ouch! 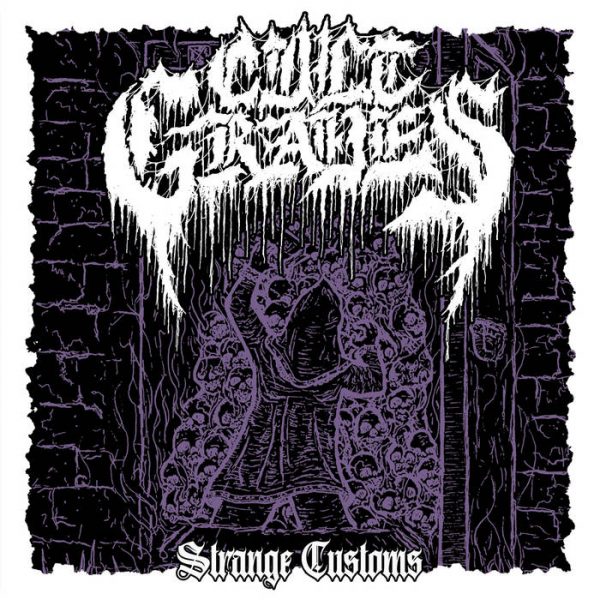