Make no mistake, this Sermon is a lot more fun than the pious propaganda served up under the same name at your local place of worship. Crypt Sermon play dark deep doom but with clean cherry-picked vocals to give the sound a welcoming warmth. While doom itself now has more splinter groups than a political party, Crypt Sermon’s style, as already stated with the crisp clean vocal delivery, is closer to Candlemass and Saint Vitus than perhaps the likes of Moss and The Wounded Kings.

Out of the Garden is the debut full length release from the Philadelphia philistines and any traditional doom mongers are unlikely to be disappointed with what they hear. Doom it may be but it comes complete with the Phil-good factor. It all begins with ‘Temple Doors’ which not so much as leaps into action, as creaks into it. A few moaning mumbled utterances over an aching drone before eventually some semblance of life surfaces and a methodical rhythm kicks into life.

A brief pause and we’re off with the sound claps louder as the vocals enter immediately revealing the great singing voice of frontman Brooks Wilson. With a delivery cleaner than a kebab house kitchen who’ve just been tipped off that the hygiene inspector is on the way, Brooks slides through the song with the grace of an Olympic swimmer. ‘Temple Doors’ twists and turns with doom-like overtures of evil infiltrating through the gloom. ‘Heavy Riders’ motors along at a steady pace, and one unlikely to trouble the traffic cops. It is though a freewheeling joyride that really clicks through the gears at the halfway mark. There’s some great riffwork too with the solos helping to pile on the layers to give Crypt Sermon a precision finish.

A crashing crescendo leads us into ‘Byzantium,’ possibly the slowest of the seven songs. It just crawls along at its own pace but with a dissonant heaviness wrapped around it threatening to flatten everything that stands in its way. A mesmerizing guitar battle breaks out at one point, the axe merchants almost battling one another for ascendency. Title track ‘Will of the Ancient Call’ spirals into action with a mind-bending riff of Uri Geller proportions. Once finding its feet the track develops into another deep and meaningful sojourn with Brooks’ Dio-like in his deftly defined delivery neatly secured within a dream-like drone of distortion.

The longest track – and the most delightfully named – is ‘Into the Holy of the Holies’ which opens with a teasing trinket before the wraps come off to reveal a monstrous thumping beast of a song. It’s heavy old school doom illuminated by Brooks and numerous solos, all of which somehow peerlessly peace together as satisfyingly as solving a particularly frustrating Countdown conundrum. The final two lumbering tracks are no less impressive, ‘The Master’s Bouquet’ including some monastic style vocals at the very beginning, while the closer ‘Out of the Garden’ is another piercing lament to Lucifer. As debut releases go, Crypt Sermon’s simply demands to be heard. 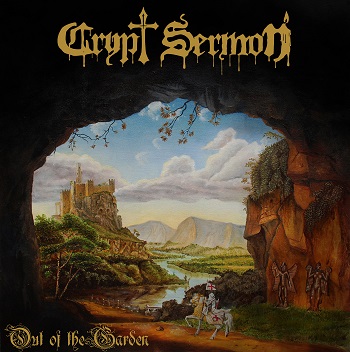