Kirk Windstein’s seat at the high church of metal was secured many years ago. His legacy, built around Crowbar and the irrepressible Down, is one that anyone would be proud to pin to the wall. Symmetry in Black celebrates 25 years with the band he created and Crowbar’s tenth album is as good as anything that the mighty southern sludgelords have done since they debuted with Obedience Thru Suffering in 1991. This is a dirty dozen of great sweeping songs with Crowbar’s classic riff writing power as prolific as ever.

Pretty much from the opening ‘Walk With Knowledge Wisely’ Crowbar’s trademark heavy-handed approach draws you in with its controlled simmering aggression lurking beneath some riveting riffs. Captain Kirk has long been one of metal’s best loved figures. Having stood shoulder to shoulder with Phil Anselmo in Down for well over 20 years, Windstein took the decision last year to sadly sever those ties to allow him to focus solely on his own first love, Crowbar.

Down will be the poorer, certainly live, for Windstein’s absence although the reasons behind the departure are admirable with the great bearded beast simply wanting to devote every drop of sweat and ounce of blood to Crowbar. As anyone who witnessed their astonishing Slade Rooms performance earlier in the year will testify, Crowbar more than live up to their name live, bludgeoning away with oppressive songs that gradually crush you into submission.

The new album doesn’t step off the path that Crowbar have trod for a quarter of a century. You know what direction they’re heading but you still want to be there alongside them for the ride. Songs such as ‘A Taste of Dying’ see the veteran rifflords swing into action sending out great crushing rhythms of neck-crunching brutality. The New Orleans swamp kings have a maturity to their sound, which is no surprise after 25 years of perfecting their art. It’s testosterone-charged and with thick sludge-laden grooves that you can hang a hat on.

Every track bristles with the energy and hostility that has been carved deep into their very being by their New Orleans homeland. It’s confrontational but this is one scrap worth accepting even if you come out with a few bruises. Crowbar craft songs that even when moving at a steadier pace, such as ‘Reflection of Deceit’, have a sound with a genuine edge to it, sharper than a barbed wire fence. Windstein occasionally lets us see a softer side to his nature and on Symmetry in Black that arrives on the sleepy ‘Amaranthine’ but this mid-album breaker is its shortest track and it doesn’t take long before the big guns are firing once more.

Since the band’s last album, Sever the Wicked Hand, bass player Pat Bruders has departed to focus on Down, to be replaced by Jeff Golden, who along with guitarist Matt Brunson keep the Crowbar sound pulsing like a juggernaut on a one way journey to hell. Songs like ‘Teach the Blind to See’ sweep everything from its path with a great dirty barrage of menacing rhythms, with Windstein’s familiar croaky cries carried along against the backdrop of Tommy Buckley’s incessant pounding.

When Crowbar performed in Wolverhampton back in February (reviewed here and Windstein interviewed here) the new material was still under wraps. It will get its first airing on a UK stage when the ball-breaking riff lords perform at Bloodstock in August. Undoubtedly their set will be a festival highlight. As the t-shirts state, when it comes to Crowbar there’s simply ‘None Heavier’. 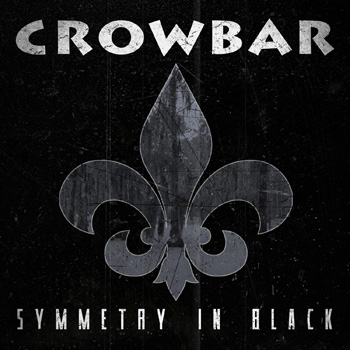