So, Pennsylvania funk rock groove-meisters Crobot are back with their 4th full-length album (and their first for Mascot), ‘Motherbrain’. It’s their first since 2016’s brilliant, funksome and colourful ‘Fat City’, but brace yourselves, Crobot circa 2019 is a beast of darker hues.

For starters, they have a new rhythm section – welcome Eddie Collins and Dan Ryan. Gone is much of the lightness of touch, the fun. In it’s place we have a lean, stripped back tension and anger. Real world issues are addressed, as are more internal torments and turmoils.

The sound, too, is harder. Heavier, more thuggish, stripped of any playfulness or frivolity. Soundgarden is a frequent touchstone, both in it’s aural downtuned introspection and in Brandon Yeagley’s soaring vocals – they’ve never been more Cornellian (?).

Opening track ‘Burn’ is a statement of intent – Zep-ish, muscular, menacing and capped with a wild solo and howling harmonica, it’s a brute. And things rarely let up – “do you want some blood?” roars Yeagley over an FX drenched riff, defiant and confrontational.

‘Drown’ is almost industrial in it’s mechanical brute force, full of ill intent. The ghost of Cornell returns as Yeagley screams, “I drove the nails through my skin…still got blood on my hands”. Blood, you begin to realise, is a constant companion here.

‘Alpha Dawg’ offers brief respite in it’s funky, trippy tribute to, erm, ‘Teen Wolf’, and then it’s back to business – and what a dark, shady business it is. ‘Stoning The Devil’ is a clear centrepiece – a huge, doomy monolith – confident and brutally calm. There is a definite grunge flavour beneath it’s mammoth scope. It’s droning, ever-evolving riff surprisingly light on it’s feet for such a big lad.

“Let the darkness surround you” implores Yeagley during the full-on rock out of ‘Destroyer’, while it punches out like a chrome plated Danzig toward the end of days. It’s swooping, spiralling guitarage barrells into the next track with zero fucks given…’tis a sinister, blackened thing.

‘Motherbrain’ is a tremendous album. Who knows what diabolical shit has gone down in the last 3 years but Crobot have emerged from it stronger and a tad more fucked up. They mean this, maaaan. This is a downright heavy album, dude, sonically and vibes-wise – darker, leaner, louder and aided and abetted by thunderously committed performances (step forwards Chris Bishop, a truly powerful and unfettered guitar masterclass). A career best.

Released by Mascot Records on 23 August 2019 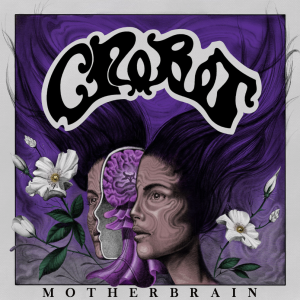