NYC hardcore heroes Cro-Mags are back…with a vengeance. Band founder and mainman Harley Flanagan, having won an ugly, protracted lawsuit and finally winning complete ownership of the Cro-Mags name, is letting nothing stop him, even a year as foul and poisonous as 2020.

Indeed, 2020 is the name of this hastily created EP, and, in a masterstroke of serendipity, it’s even 20 minutes and 20 seconds long (well, it was 20 mins 16 secs…so they added a few seconds of civil disturbance stylee noise). And yes, it does address this oh so “special” of years and Flanagan, being the Hardcore MMA dude he is, has tackled it head on, from street level, in all it’s brutal, confusing, multi-narrative glory.

Cro-Mags already have previous with this Covid-riddled annus. The band were due to kick off their latest tour (with Body Count) back in March, and you know what happened next. Instead of sitting back and learning to bake banana bread, these bull-necked bruisers put together one of (if not the) first live stream gig – ‘The Quarantine Show’. So, the prospect of writing and recording an EP didn’t phase them in the slightest.

With barely time to introduce a grubby hip-hop beat, we’re off into ‘Age Of Quarantine’, a song bolstered by some serious metallic heft. Make no mistake, this fucking roars. There’s no anxiety here, no hiding behind tin hat conspiracy theories, Flanagan is pissed off and about to indulge in some serious aural ground ‘n pound. The bass rattles, the gears change ferociously and a head of full-on thrash punk steam is worked up quicksmart.

And, unsurprisingly, there’s no let-up. There is much more punishing riffage, fearsome kick-drumming and mucho growling. It’s oppressive, bearing down on you, going in for the kill. It’s precision bludgeon, brutal and energising stuff. ‘Life On Earth’ tackles the global health crisis – pollution continues, societies collapse and it all just keeps getting heavier.

After it’s cool, dub intro, ‘Violence And Destruction’ does exactly what it says. A genuinely relentless noise is laid down while Flanagan ponders an issue more relevant than ever – does disagreement have to result in violence and abuse? What happened to debate, communication, respect? ‘Chaos In The Streets’ takes the debate to it’s logical conclusion. It’s the sound of violence, there are definite shades of Pantera and when Harley says that you’d “better back your ass up, motherfucker”, it’s probably best to do what he says.

We end with a fascinating (and noisy) curveball. ‘Cro-Fusion’ is the result of a 20 minute studio jam. Taking their cues from the 70’s jazz fusion of Lenny White and Billy Cobham, this is white-hot hardcore fusion at it’s finest. Riffs and themes drift in and out of the general noise terrorism. Chaos, static, disinformation, fear, paranoia – it’s all in these grooves.

This is short, sweet and brutally efficient, Cro-Mags are clearly going for a bloody first round knockout. perhaps THE soundtrack to the year, capturing all those emotions we’ve all felt and dialling them up to 11. All the good, all the bad, the best and worst of us, it’s all here. Covid, BLM, economic meltdown, division – melted down, made into a particularly monstrous-looking knuckle duster and applied, with considerable force, to your face. This fucking year, man. 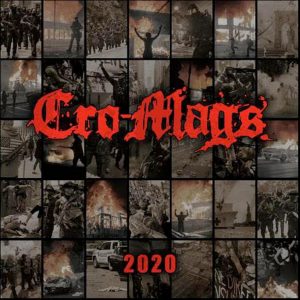