A gut punch in the flesh…

Brummie hard rock trio Crimson Star consist of James Shaw (Vocals/Guitar), Ross Edgington (Drums) and Roger Ash (Bass) and Bay View is their second EP release. For a relatively new band these guys come across like hardened professionals with a defined sound and top-notch production on this EP. Crimson Star has a strong stoner edge to their alternative driven hard rock and will definitely appeal to fans of Queens of the Stone Age, Kyuss and Soundgarden.

I really like how they mix deep beefy guitar riffs and lighter higher pitched guitar licks. I found that the beefy guitars enhance the stoner edge and the higher licks accentuate the alternative edge to the songs. Shaw has a deep vocal which at times reminds me of Creed frontman Scott Stapp, but Shaw’s approach and style has more in common with Chris Cornell of Soundgarden.

The five tracks are all impressive and diverse enough to maintain your attention throughout. ‘The Pragmatist’ has a great solo, very alt rock and it blends effectively with the stoner driven deep guitar riff. The most unusual track is probably ‘Euthanise Me’ which has a low-slung guitar riff, which matches the punch of the chorus but the verses have an almost lounge singer type avant garde feel to them. It may sound odd, but Crimson Star make it work. The easiest song to get into for me is actually the EP closer ‘Gimme Some’ which has a driven guitar riff from the offset that hooked me instantly.

It’s a bit dark and doomy and if you like moody grunge influenced hard rock this EP will definitely get under your skin. Crimson Star sound really promising and should make waves in the alternative rock scene, I would say they’re well worth a look live too as they have a sound which should come across with a gut punch in the flesh. 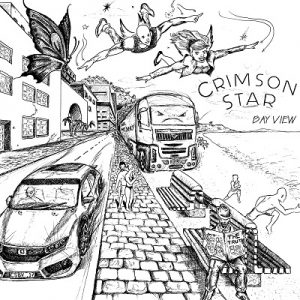