Fresh from what the posher papers might describe as his critical and artistic triumph with his brilliant writing and production work on Chez Kane’s debut album earlier this year, Crazy Lixx’s founder member and lead singer, Danny Rexon goes back to the day job for the band’s seventh album, Street Lethal. The band’s raison d’etre has always been to recreate an 80s sound, based on hard rock with obvious lashings of glam metal and AOR. ‘We try to position ourselves 30 years back in time’, Danny Rexon told a Japanese interviewer, and that gives you a pretty good idea of what to expect from a Crazy Lixx album.

For the most part, Street Lethal doesn’t deviate much from this policy, it’s only a shame that the album is released in November rather than June or July, as, like Chez’s album, it’s ideal for driving in the sunshine with the window down and the car stereo up. After the intro, the 61 second long ‘Enter the Dojo,’ complete with suitably Japanese-style sound effects, ‘Rise Above’ enters with a quick roll of the drums and it’s almost a musical time machine, taking us back to the heyday of bands like Motley Crue and Def Leppard selling albums by the container load, although it does have to be said that sometimes there is a more up to date touch, something that brings to mind modern Scandinavian bands like Eclipse, H.E.A.T. and the mighty W.E.T. Danny Rexon certainly knows his way round a hook, the riffs and guitar playing are sharp, and the songs are full of energy, even when the band let the pace slacken a little for a song like ‘The Power’, with its guttural ‘Hey!’ backing, the songs are still insistent and infectious.

Highlights on the album include the first single, ‘Anthem for America’, stating firmly that ‘rock is all you need’, ‘In the Middle of Nothing’ is one of the few occasions where the pace lets up, a proper lighter waving ballad, ‘Reach Out’ might even have Bon Jovi listening hard and taking notes on how to write commercial rock songs again, and album closer ‘Thief in the Night’, the longest track on the album, with its excellent guitar finale. In the 80s it was almost a legal requirement to have a song with ‘rock’n’roll’ in the title, and ‘Caught Between the Rock’n’Roll’ does the job here, another good track with a great chorus, made for the band to invite the audience to sing and clap along. I’m not so sure about the title track ‘Street Lethal’, it’s not quite as immediate as most of the rest of the album, but it does have a satisfyingly menacing riff, but on the other hand, I do wonder about how ‘Final Fury’ fits in with the rest of the album. It’s a comparatively brief instrumental, based around a synthesiser rhythm track, underpinning a guitar solo, and does break up the flow of the album.

It’s probably a sign of the times, but a lot of the lyrics steer clear of the staple subjects of metal in the 80s, no ‘Lie Down, I Think I Love You’, even very little straightforward romance, apart from the ballad ‘In the Middle of Nothing’, where Danny Rexon does a fair impression of Joe Elliott. Instead, there’s a lot ‘inspirational’ stuff, plenty of references to ‘feeling the power’, ‘standing tall’, and visions and dreams. Track 4, ‘The Power’, even has an almost inspirational voice over at the end. That’s not a criticism, more of a reflection on how times have changed since the aforementioned 80’s heyday.

While the initial physical release of the album is on CD, there will also be a limited edition, yellow vinyl release in December, available from Frontiers’ webshop only. While this is the band’s seventh album, there’s no sign of the band running out of energy or ideas, in fact this is one of their best releases to date. The songs are good, the playing excellent and a lot of it will more than likely sound terrific live. Job done, I think. 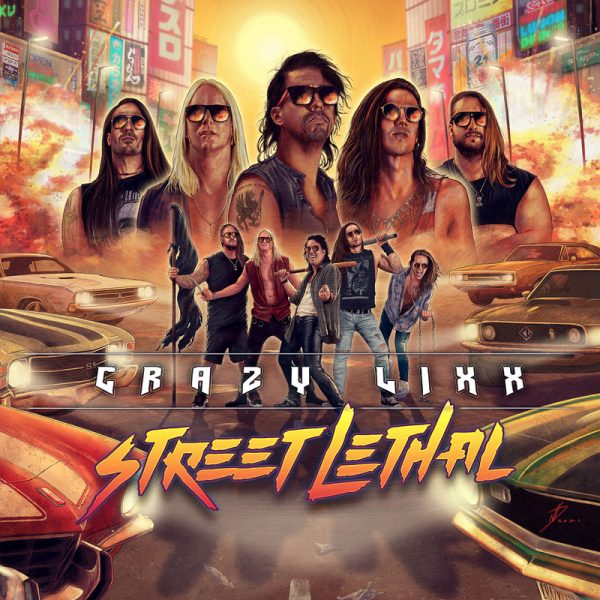