It’s been a while since Cradle of Filth have undertaken such a full-on tour schedule but despite that the Wulfrun was some way short of its capacity for the arrival of their ‘Inquisitional Tourture’ tour. This in no way took the wind from the sails of openers She Must Burn who have just released their self-titled debut EP. This they were clearly keen to share with everyone who did turn out at the Black Country venue.

Although probably not known to most of us present on the night, the London six-piece proved easy to warm to. Frontman Joe is a lean and likeable warrior caked in tatts and topped off with a shock explosion of blonde hair. Very much the focal point, Joe never stood still throughout a searing high-tempo performance of full on metalcore attacks.

The twist with this lot is keyboard player Amy who brings a symphonic sophistication to She Must Burn’s overall sound while at the same time offering vocal support of her own. In contrast to Joe, Amy’s warm and harmonic tones take the songs in a different direction and the male-female vocal balance works well. She Must Burn will be back on the road throughout November promoting their new release as part of the Heart of a Coward tour.

Another six-piece, and again with shared vocals were next up in the distinctive shape of Ne Obliviscaris. I caught some of their set at Bloodstock recently and it was good to see the Aussies make a quick return to these shores. They’re quite an unusual outfit with the almost androgynous like Xen taking the main snarling vocal duties supported by the more laid back Tim who couples his melodic harmonies with intermittent violin playing. It’s almost a musical good cop – bad cop. So, not your everyday bunch, then. Somehow the antipodeans make it work and the steadily increasing Wulfrun crowd responded favourably to the Melbourne men, clapping along when encouraged to do so. 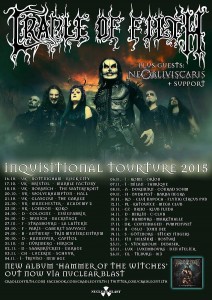 Cradle of Filth took to the stage Indian file, each acknowledging the crowd in turn, colourful frontman Dani bringing up the rear with more make-up than an Avon salesgirl. The filth and the fury is a little stage-managed these days and almost has the air of a metal panto. Sure there were a couple of giant crucifixes flanking the stage from which was suspended a full size skeleton. However, as these had been in situ since everyone entered the Wulfrun the impact was a little lost by the time the headliners arrived. In fact the skeletons were almost by this point being treated as old pals by the crowd which was less sizeable than might have been expected for a band with such a reputation for putting on a show.

Cradle of Filth’s new album Hammer of the Witches is one of their most successful in years, the move to Nuclear Blast, doing them no harm whatsoever. Spurning the trend to start a set with the first track off the latest album, Cradle of Filth began with the 20-year old ‘Heaven Torn Asunder’.

We had to wait until the fourth song before we actually heard anything from the new album, the whispy tones of organist Lindsay Schoolcraft signalling the start of ‘Blackest Magick In Practice,’ more evenly paced than a lot of Filth songs and bolstered by a melodic mid-tempo riff. Also from Hammer of the Witches we heard ‘Deflowering the Maidenhead, Displeasuring the Goddess’ a more intense trip into the badlands occupied by the Filth and as with almost every song, peppered with the diminutive Dani’s trademark gore screeches that ensured anyone suffering from sensitive ear drums would have been suffering big time by the end of the night.

While not quite the unearthly extreme metal tyrants of two decades ago, this latest reincarnation of the Cradle of Filth line-up can still put on a show, complete with a few exploding fireballs, even though the posturing does seem slightly less intimidating than it once was.