As one of the very first crossover bands Corrosion Of Conformity blazed a trail and soon evolved from their provincial hardcore roots into a fully-fledged sludge metal monster. The none-more-heavy Sleeping Martyr: 2000-2005 collects three (criminally) overlooked albums from the band’s middle period and shows why Corrosion Of Conformity’s sound still continues to inspire countless bands.

The turn of the new millennium was a time of great change for Corrosion Of Conformity. Dropped from major label Columbia they signed with indie Sanctuary and veered into a more polished, Southern rock direction. A gruelling tour with Metallica was also an influence and America’s Volume Dealer was also informed by their Load/Reload albums (note the vertigo swirl cover) and like those records it’s slightly bewildering. Nevertheless, the brutally heavy riff that heralds the arrival of opening cut ‘Over Me’ is reassuringly familiar, as is the gnarly solo on the following ‘Congratulations Song’. However, the wonderfully distorted fuzz that characterised their previous albums has been eschewed in favour of a cleaner, pristine sound and the overall feeling is that there’s an essential ingredient missing, especially when they go all out country on ‘Stare Too Long’.

I’m sure Corrosion Of Conformity left a few fans behind with this release. Whether it was label pressure for a radio friendly sound or a cynical stab at the charts (it didn’t work) America’s Volume Dealer falls short of previous releases but it’s carried forward by the variety of its songs. For every track that sounds like a pastiche of 90’s Metallica (‘Who’s Got The Fire’) there’s the brilliance of a ‘Sleeping Martyr’ to even out the score. In fact, this album works best on songs like ‘13 Angels’ when the band ease of the throttle and let light into their music; the quieter passages act as a mirror to highlight the heavier sections, although there’s no denying the brute strength of closer ‘Gittin’ It On’. While certainly not a bad album America’s Volume Dealer departs too radically from the bands core sound and stumbles around in a musical no man’s land.

Recorded in Detroit this album collates tracks from four records that comprised their “metal” period (91’s Blind through America’s Volume Dealer). Live Volume finds Corrosion Of Conformity in their natural habitat and opens to a wall of glorious feedback (now that’s more like it!) which segues into the instrumental ‘These Shrouded Temples’. As live albums go Live Volume is damn near perfect; the band are on fire and lock in tightly, the audience is prominent in the mix and the sound is nice and beefy. In short, it exactly replicates a Conformity gig; you can almost see the sweat dripping from the ceiling and feel the bass thumping your chest. But best of all the aseptic tracks from America’s Volume Dealer are given the punch they deserve, and this is how ‘Diablo Blvd’ and ‘Zippo’ should have sounded, and should be heard.

With long term drummer Reed Mullen side-lined Jimmy Bower (Crowbar, Eyehategod) was behind the kit and his tight-but-loose style was perfect for the band and he seems intent on pulverising his drums into the stage floor. Pepper Keenan pulls some impossible riffs from his guitar and wears his heart upon his sleeve by throwing a few bars of Sabbath’s ‘Sleeping Village’ into ‘Albatross’. Reading like a ‘greatest hits’ Live Volume is a joy from start to finish with ‘My Grain’ featuring some nifty bass work from Mike Dean and ‘Vote With A Bullet’ being a something of a smoking gun. At almost 80 minutes this album leaves no stone unturned and by the time we reach closer ‘Clean My Wounds’ were left a little punch drunk; there’s no soppy ballad or such to spoil the party just 15 tracks of the best Southern sludge!

After a lengthy hiatus during which the band indulged in side projects (most notably Down), Corrosion Of Conformity returned in style with In The Arms Of God. Opening shot ‘Stone Breaker’ put its foot down hard on the distortion pedal and didn’t let up for the whole album. More changes brought Stanton Moore to the drum stool, and he immediately makes his present felt. A beast behind the kit he ensures that ‘Paranoid Opioid’ marches like an invading army whist swinging with that Sabbath groove. This album is a vast improvement on their last studio outing and while five years separate them Corrosion Of Conformity, by returning to their sludge roots, paradoxically, sound light years ahead.

If I had only one word to summarise this album it’d be “riff” and In The Arms Of God has them in spades. Like an anchor tied to a drowning man ‘Never Turn To More’ drags the listener down to delirious depths while ‘Infinite War’ is akin to being dropped in a vat of treacle and trying to fight your way out. While the riff is king this album is far from one dimensional and ’Rise River Rise’ features middle eastern flourishes over acoustic guitars to provide some light in the dark. This album amps up the stoner influence (but it’s more bad acid nightmare than hippy dream) and the penultimate ‘Crown Of Thorns’ is a disconcerting piece of music that softens the listener for the knockout blow that is the title track. At almost seven minutes it could soundtrack global warfare and a world perishing in flames and brings the album to a cataclysmic conclusion.

Housed in a beautiful sleeve and accompanied by a lavish booklet featuring an interview with Pepper Keenan these three albums have never sounded better and deserve some serious reappraisal. 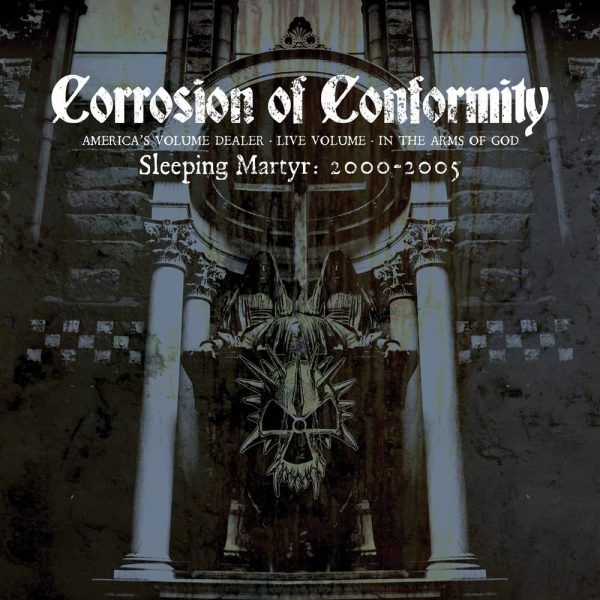