All looks rosy in the Corpse Garden…

As sure as we know taxes and death await us, with equal assurance we can state that any albums released through Satanath Records are going to be gruesome affairs. Entheogen, the second album by Costa Rican wrecking crew Corpse Garden, does not disappoint. The death metal diehards have undergone some key line-up changes since their debut release Burnt By The Light (2012), but the overall old skool death metal ingredients are still to be found alive and kicking at the very core of this five-piece.

A little research reveals that Entheogen is some kind of chemical substance that is often used in religious or spiritual practices to aim for transcendence. Well it’s fair to say that by the time you’ve finished listening to this savage release, you too may be in need of a little pick-me-up. Technically packed tighter than an early evening train out of Euston, Corpse Garden connect with a whole host of death metal giants who were doing this kind of stuff a couple of decades ago. Take Morbid Angel as good a reference point as any.

South America has always ‘got’ death metal and Corpse Garden have the qualities to assert themselves in this field. The fact that in 2012 they saw off around 90 bands in the Central American leg of the Wacken Metal Battle competition to earn their place on the Wacken stage speaks volumes for their ability.

‘The Quantum Rapture’ is a frenetic first song with singer Felipe Tencio in fine vocal form with his guttural drawl while the axe men lay down some neck jangling rhythms. The drum kickbacks go into overdrive at the start of ‘Portal To The Oneiric’ parting like the Red Sea to allow a spine tingling riff to cut things up good and proper. This is one of the longer tracks at around six minutes and shows Corpse Garden are capable of developing a song through multitudes of layers rather than just crashing through at breakneck speed. ‘Suspended over the Abyss’ is a twister of a track guaranteed to whip up a circle pit with an edgy bass digging away at your sides like a middleweight boxer it’s breakout solo nestling neatly into the core of the song.

Entheogen comes in at the hour mark which is longer than the majority of death metal albums. ‘Evoking the Dead Sun’ is a seven and a half minute epic with buzz guitars clashing furiously against a double pronged vocal assault, one guttural, the other screeching like a banshee who’s just missed the last bus home. The extended solos seem to work well and Corpse Garden show they’re not afraid to deviate from the template when the mood takes them. That’s certainly the case with the midway soother ‘Neux Ex Machina’ when a gentle female voice can be heard speaking softly over a soft soundtrack completely absent of blood guts and damnation.

We’re back to type on ‘The First Incarnation’ complete with the guttural hiccups and frenetic drums married to some savage riffs, the whole hypnotic mayhem threatening to swallow you whole. ‘A Balance Of Opposites’ has a real Pantera edge to the intro, with a raspy repetitive riff that dictates the mood and pace of the track to great effect. If you want to find a negative on Entheogen then perhaps the hour is overegging the pudding a little. That small caveat aside, all looks rosy in the Corpse Garden. 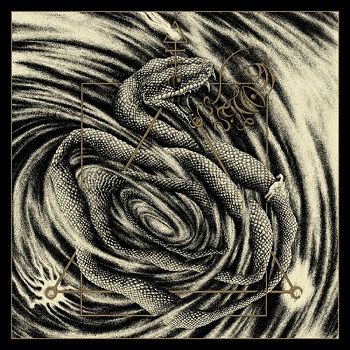