Adding another layer to his critically acclaimed solo catalogue, GRAMMY® Award-winning singer/songwriter, actor, and New York Times Best-Selling Author, COREY TAYLOR has revealed the details for his new EP, CMFB…Sides, arriving Friday 25th February 2022 via Roadrunner Records. It’s available to pre-order/pre-save on all streaming platforms. To herald its release, the first single, a cover of John Cafferty & The Beaver Brown Band’s ‘On The Dark Side’ is available now on all streaming platforms.
CMFB…Sides comprises nine unreleased B-sides, covers of tunes that inspired the band, acoustic renditions, and live versions. Taylor preserves the windows-down and arena-ready spirit of ‘On The Dark Side’, made famous by John Cafferty & The Beaver Brown Band in the 1983 film, Eddie and the Cruisers, and strips the 1981 classic, ‘Lunatic Fringe’ by Red Rider down to a striking acoustic number. He and his cohorts hypercharge ‘Got To Choose’ by KISS and lock into a punchy punk gallop during Deady Boys’ ‘All This And More’. Initially recorded for The Metallica Blacklist, the EP also features Taylor’s snarling cover of ‘Holier Than Thou’ from Metallica’s classic, The Black Album. Perhaps most surprisingly, they also transform Eddie Money’s ‘Shakin’’ into a roaring banger with all of the original’s swagger intact. The EP also boasts acoustic takes on ‘Kansas’ and ‘Halfway Down’ from Taylor’s 2020 full-length debut, CMFT, and a powerhouse live medley of ‘Home’ and Stone Sour’s famous Come What(ever) May finale ‘Zzyxz Rd.’
This coming Monday 14th February, Taylor will release a performance video of the live ‘Home’ / ‘Zzyxz Rd’ medley, shot during last year’s epic Forum Or Against ‘Em livestream event. Fans can visit Taylor’s official YouTube channel on the 14th to watch the performance. 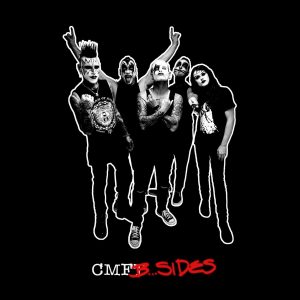