Sometimes life isn’t fair. Sometimes, through no fault of your own, just by sheer unfortunate fluke, you find that you have an extra mountain to climb, extra travails to overcome just to break even. Maybe it’s an accident of birth or occupation or even, say, location. Who knows. Sometimes there’s just an unwanted burden of expectation. Anyhoo, I digress. Connor Bracken and the Mother Leeds Band are based in Asbury Park, New Jersey.

See what I mean. However good you are, you’re going to be measured against him. It’s unfair, I know. Kinda like a one-eared ginger kid starting at art college in the Netherlands…the odds are stacked against you. However good these guys are (and they are good), they’re never going to be the local heroes. And if you can’t be the best band in town, how do you go to take on the world?

So, we’ll do what we can. We’ll ignore that other guy and focus on the album at hand. Connor Bracken and co. have built up a reputation as a killer live band and ‘Nightbird Motel’ is their sophomore album. It aims to utilise modern studio savvy to capture the raw energy of their live shows. It also, deliberately or not, does something else.

Some albums take you on a journey. They tell a defined story or contain an overarching theme. They have a holistic vibe, an attitude, they define a way of life. You’ll certainly have a favourite album that does this, that takes you on a journey, in whatever way that may be. This album does that – but in a slightly different way.

The album was two years in the making. Two years. That’s a long time for a young band. In two years a band can go nowhere, they can fall apart, or they can grow, mature, discover who they are and what they can do. I mean, c’mon, Led Zep progressed from I to IV. The Clash went from their debut to London Calling. Mountains can be moved.

The thing is with ‘Nightbird Motel’ is that this journey happens within the space of the album. We kick off with ‘When The World Stops Turning’ – guitar. Drums. Riffs – it’s all present and correct. There’s an Indie rock vibe with more than a dash of snotty punk attitude. It’s rabble rousing and it rocks. Plain and simple.

And on it continues with more of the same. It’s feelgood, celebratory. It quite often does that whole drop down low and then kick off again thing. It’s good. And then ‘Darkness’ arrives with it’s slight change of tone and stream-of-consciousness lyrics. It’s melodic, sleek and slick.

We get more of this on ‘Blame On Me’. It’s bigger, heavier, more sinister – the guitars ring out loud and true. it’s howling solo echoes through the Vegas desert that inspired it. It all ends with a lone mandolin. Ok, so this isn’t going to be just another Strokes-alike deal.

‘Liquorstore’ is just good rock ‘n roll, front-loaded with punky energy. Wherever and whatever this liquorstore is, I want to go there. ‘Voice On The Radio’ is autobiographical, Bracken, when not rocking the Broadwalk, is a late-night talk radio show host. This, obvs, is about that…and the weirdness that can entail. It grooves into a nice trippy psyche breakdown and this – when they trust their instincts, when they stretch out like this, explore, push their boundaries, this is when they’re at their best.

And then we get to ‘Nightbird’. Bracken himself has said that it is something of a culmination of all they’ve done before. “I knew there was somewhere we needed to go but I didn’t know where. Nightbird’s the place”. It is a glorious slice of American heartland rock. It has Petty-esque greatness within it. The band are genuinely flying here, growing before our very eyes (ears). As it drifts out into its elegant guitar coda you know you’ve just heard a modern classic in the making. Southside, Lou Reed, him – they’re all in here.

We end with another blast of rock and roll (which is now brilliantly effortless) and a chance to catch your breath and reflect with a final acoustic, folky, outro instrumental. So yes, a journey, for listener and band. You go with them, you hear them grow and achieve something damn close to greatness. We’ll be hearing much more from Connor Bracken and the Mother Leeds Band, I suggest you jump on board now. 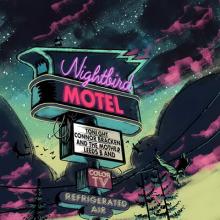