Nihilistic Midland quartet Conjurer have pulled a rabid rabbit out of the hat in the form of debut album Mire, released by Holy Roar Records on March 9. Paul Castles falls for their dark powers.

The underground Midlands metal scene has rarely been so vibrant. But if you have to pick one act capable of climbing out of the basement underground club circuit then corrosively charged Conjurer are probably at the helm. Familiar names now to those who can be found regularly lurking in the shadows of subterranean venues, Conjurer certainly have the musical credentials to outgrow this environment. It’s not just a case of playing bigger stages, as taking them by storm.

With a couple of impressive early bird EPs successfully under their studded belts, Conjurer now reach for the echelons of the bigger league with this demonstrative debut full length release, Mire. The material is denser than badly made gravy and just as black. In fact these songs stick to you like some kind of classroom chemistry experiment gone badly wrong. At times it feels almost suffocating to listen to these pounding expressions of hate, so it’s little surprise to discover that the album opener is called ‘Choke’. The bludgeoning early blasts, slow, weighty and full of menace, make for an uncompromising beginning as emotions are stretched to near breaking point. Much like a giant elastic band being pulled ever further back, the tension inevitably snaps like a tendon allowing a cacophonous cauldron of spewing fifth to erupt violently. And that’s just the first song!

‘Hollow’ is no less hostile, beginning with a minute of devastating doom aftershocks that threaten to expose any cracks in your plasterwork. It’s followed by some transcendental rhythms accompanied by a strained snarling voice in the far distance, before the whole things implodes as the thunderous and brutal doom blows land once more and the sprawling caustic canvas opens up with vocalist Dan Nightingale giving full vent with his aggravated aural atrocity. 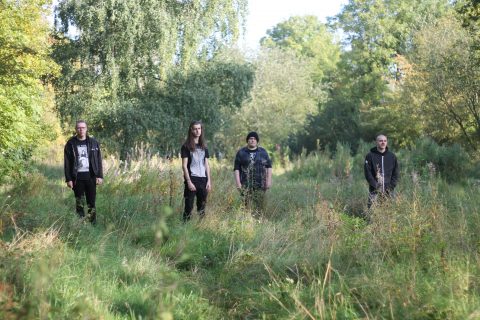 At eight and a half minutes, ‘Thankless’ is the longest of the seven tracks on Mire. It marries together a range of soundscapes but does so with a confidence and assurity that belies their age as this youthful quartet display a measured musical maturity beyond their years. For the first time on the album some clean vocals are used, courtesy of guitarist Brady Deeprose, as Conjurer allow occasional shards of light to illuminate the overwhelmingly blackened canvas.

‘Retch’ is the shortest number here and again Conjurer execute exemplary tempo control with the mood ranging from full on rapier explosions intertwined with their signature doom segments when things at times grind perilously close to a halt. The album’s title track simply hurls itself into a destructive chamber of chaos and yet even here within the maelstrom of carnage created by Conjurer there’s an abundance of grating textures within the madness.

‘Of Flesh Weaker Than Ash’ is another lengthier track, not quite as furious in tempo but no less authoritative. In fact the more defined riff patterns allow the song to really grow and Conjurer’s spellbinding ability to find a way out of these complex aural algorithms that would leave less able musicians up a blind alley. Conjurer steer this one over the line brilliantly, taking the punishing patterns ever upwards to a soaring teethbaring finale. Album closer ‘Hadal’ is introduced with some of the by now familiar low slung blows that Conjurer inflict with such devastating command and grows into yet another rock of charcoal cuts.

Having followed Conjurer’s career closely from the start, it’s clear that they are now well on the way to fulfilling the potential that was so evident from the very beginning of their journey.