Albums are occasionally heralded as “ahead of their time” (usually by the artist’s PR company), but few, if any are. The vast majority are firmly the product of their time, and Friction sits very much with the majority. And that’s clearly in its favour. To explain:

For Carl Dixon, Andy Curran, Steve Shelski and Barry Connors, there were strains apparent at the time, including “staff turnover” tensions within the band, and musical direction differences between the band and “opinionated” producer, Max Norman. No bad thing, as it turns out. A relaxed, laid back atmosphere can lead to self-indulgence and a dilution of critical functions. No danger of that here. It’s clear that Norman and the band were united in knowing the precise boundaries of mid-eighties melodic rock/AOR, and the limitations of the genre. Only an intimate knowledge of these things can allow you to stretch and push your own brand to the edge. Some of Coney Hatch’s finest songs are here, some strikingly immediate, (‘She’s Gone’, ‘Fuel For The Fire’), some saving their emotional reward for repeat plays (‘Coming To Get You’, ‘Burning Love’).

At various times the recording has been critically dismissed by crusty, print media cynics as being “keyboard heavy”. It isn’t. Dixon’s and Curran’s guitar fills, frills and punchy, thick cut riffs are dynamic and sharp, defining the music’s direction of travel. It’s the guitars that provide ‘This Ain’t Love’ with its strut and swagger, a pivotal track given weight by the heft of heavy duty axe work and a pounding, percussive riff. It’s primal and yet as radio friendly as Autograph or Alias.

All round, the number of influences the band take in their stride is breath taking. With ‘Wrong Side Of Town’, they ignite the full burn ferocity of Rose Tattoo, hosed down and filtered through the tuneful seismic rumble of Van Halen’s user friendly groove. ‘Girl From Last Night’ strays satisfyingly into top forty pop territory, without (despite its title) embracing cheap sentimentality, and ‘Fantasy’ captures the unadorned adult rock of fellow Canadians, Triumph and April Wine.

This reissue – one in a long line from this label – benefits hugely from a skilful remastering job, one that improves definition and sonic separation without falling into the dynamic range compression trap. They’ve also added a cracking bonus track, ‘Fuel For The Fire’, previously a single release B-side.

But back in 1985, a shocking lack of publicity saw the album being relegated to the bargain bins of the world, deflating the band’s legacy. Friction had completed a trio of eighties’ albums. A slim volume of work perhaps, but one that still holds its head high and is ripe for rediscovery. 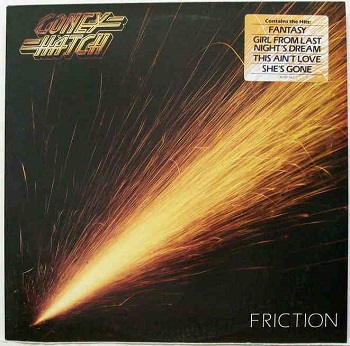 Wrong Side Of Town

Coming To Get You