Due to interview commitments with headline act Conan I was only able to catch the tail end of The Moth’s set at The Oobleck. The best compliment I can pay the German trio was that I felt disappointed not to have seen a bit more of them. In Cècile they had an engaging frontwoman whose shorts left just sufficient room for a carefully considered Black Sabbath patch. Their fuzzed up sludge went down well with the The Oobleck early birds and the Hamburg trio got the evening off to a warm and welcoming start.

Ki are a local band pieced together around a year ago from various remnants of Moghul who were a familiar feature on the Birmingham underground scene for several years. Unfortunately Ki weren’t quite my thing as the dark footprint that Moghul used to leave embedded in your face has now made way for a slightly less confrontational, more progressive soundscape.

There’s absolutely nothing wrong with that at all if it is the direction they now choose to go down.  Some of the ambient instrumental sections however were more ponderous than persecuting. The faster sections had some good points but they possibly did not quite carry the cape of darkness associated with a bill of this nature.

That’s not an accusation you would care to dangle under the noses of Khost. I last saw this local duo perform on the Doom for the Doomed bill, headlined by Moss, at the Asylum in May (reviewed here). With a backing tape taking care of the percussion, as well as other less obvious aural additions, Khost create a diet of distorted noise that even hardened and experienced listeners struggle to digest. Effectively creating a near insurmountable barrage of blackened shapes, Khost almost invite you to try and climb their wall of death knowing full well that the majority will fail.

The two band members – Damien and Andy – both head to toe in black, add an additional barricade by keeping caps and hoods firmly on heads throughout. Andy, stage right, somehow manages to stoop so low when cradling his guitar that he displays the agility that would even draw respectful approval from a Bolivian bellydancer.

Khost’s sound is almost entirely instrumental and Andy’s strained contributions from the mic are so infrequent as to almost be superfluous. Their creative streak is never going to make the mainstream and such is its nihilistic content that even many of those who fester in the dank netherworld of the musical underground will struggle to navigate through its charred catacombs. The sound is pulled so tight it almost hurts. The pieces have no real beginning or end or structure in the usual manner. The crippling joins between tracks are so laden with distortion it’s never really clear when one number starts or another ends.

The pair have just released their debut album Corrosive Shroud. For those who can go some way to unlocking the Khost mindset the rewards are plentiful, just don’t expect to see them headlining the NEC any time soon.

Conan returned to the UK on something of a high with the badlands of the US well and truly lain to waste by a cross-Atlantic visit during which they performed at such stellar social gatherings as the Psycho Festival in California and the renowned Maryland Death Fest.

I’ve seen these Merseyside marauders several times now but the force of their doom-laden battle infused songs still forces you to take a retreating step when those initial deafening rhythms crash down. That was certainly the case with pulverising opening song ‘Crown of Talons’ which tore into your skin from the off and then refused to relinquish its vicelike grip during an interminably prolonged intro before recently recruited drummer Rich Lewis unleashed his sticks to provide a percussion reference point with the power to floor an ox.

Conan now embrace many elements, with singer Jon Davis also managing his own burgeoning Black Bow Records; already responsible for a number of impressive releases from the likes of Headless Kross and Undersmile. His Conan sparring partner, bass thrusting Chris Fielding, produces most of these releases at Davis’ own Skyhammer Studios. But while the pair have a bond and enterprising interests to share off stage, on it they combine to deliver a monstrous display of warrior like battle cries played out against an imperious backdrop of thunderous riffs.

While certainly happy to be part of the current wider doom renaissance, Conan offer much more than that. The songs have a primeval grandeur about them that would not be out of place as a musical accompaniment to Game of Thrones. The band are still riding the waves of last year’s release Blood Eagle, but managed to share an as yet unnamed new song with The Oobleck crowd. More familiar, of course, were such eagerly received Conan favourites as ‘Foehammer’ and the ubiquitous mayhem of ‘Hawk As Weapon’.

By the time Conan finished up with ‘Satsumo’ the midnight hour was upon us. With senses steadily reassembled by the toxic mix of late night air and restoration of brain cells, it was homeward bound. As for Conan, another battle in their global conquest had been fought and won. 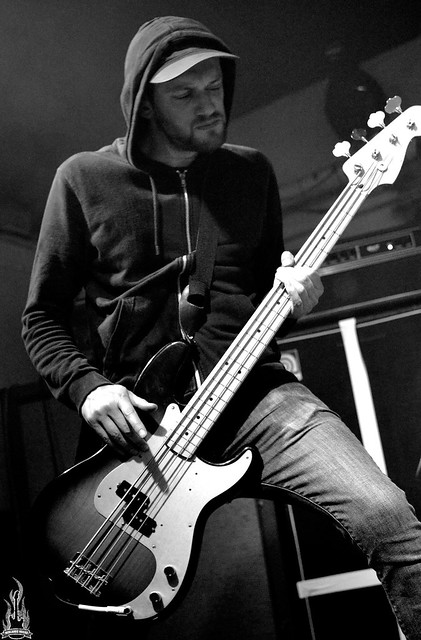