Hailing from Aarau, Switzerland and now celebrating their 10th anniversary perennial thrashers Comaniac are about to unleash their third long player, Holodox. Building on the success of their previous releases it’s an all out thrasher that should elevate Comaniac to metal’s top tier.

Wasting little time on pleasantries the whiplash inducing title track arrives like a nuclear blast then fans out waves of radiation. Racing out the blocks Comaniac have a sound that recalls the edgier end of thrash: Atheist, Voivod and Pestilence are all brought to mind in their employment of unorthodox time signatures. Founding member Johas Schmid has a huge vocal range and alternates between high pitched squeals and guttural growls while the gang back ups add a touch of menace and add a street level feel which is carried over to latest single ‘The New Face Of Hell’. Mashing up hardcore punk and thrash it’s a weighty, riff heavy affair that’s overlaid with vocals that are spat with vengeful spite.

Comaniac released their debut album Return To The Wasteland in 2015 while their sophomore effort Instruction for Destruction followed two years later. Each album built on its predecessor and Holodox continues the bands upward trajectory. The three records hang well as a triptych but their latest release evidences a real maturity primarily due to the variety on offer. Holodox is still a full on thrash fest but tracks like ‘Art Is Dead’ trade speed for power to attack the listener from a different angle. Like an electrocuted serpent ‘Head Of The Snake’ fractures in different directions with guitarists Mössinger and Schmid delivering solos that sublimely slide as if over hot sand.

Rolling from speaker to speaker like a division of panzer tanks is ‘Narcotic Clan’. Drummer Stefan Häberli delivers a lesson in violence and hits the skins particularly hard and drives the song forwards and at a frantic pace. An acoustic introduction heralds the arrival of ‘Legend Heaven’ and creates a moment of brevity before exploding into life like a nail bomb. With plenty of shredding and riffs falling like guillotine blades (in perpetuity) ‘Legend Heaven’ betrays its ambient beginnings and evolves into an all out Teutonic thrash attack of which the likes of Kreator and Destruction would be proud.

‘Love And Pride’ is certainly no love song as Jonas delivers his vocals with a nice throaty rasp and his guitar combines with Valentin’s to create a musical maze in which the listener could quite easily get lost. New bassist Joel Strahler imparts a hefty print on the penultimate ‘Under The Gun’ by laying down some nice runs as the guitars scrawl their sound like a spider that’s stepped through an inkwell. While most thrash albums race to a frantic conclusion (think ‘Battery’ or ‘Hook In Mouth’) Holodox takes a more measured approach and it’s all the better for it. Peppered with strings and acoustic guitars ‘Bittersweet’ stands defiant to create a more thoughtful finale.

While Comaniac aren’t reinventing the wheel there’s plenty of invention on show to keep even the most casual fan interested and an air of originality that’ll reward repeat spins. 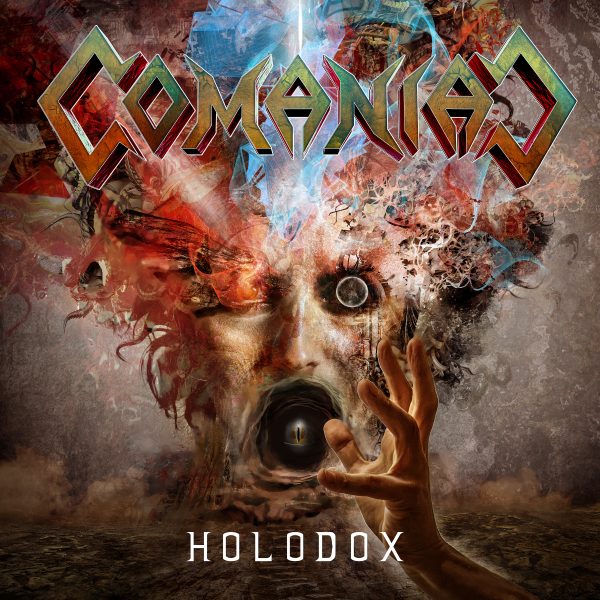