Formed in New York City in 1986, Circus Of Power perfectly straddled the line between hard rock and heavy metal. The bands great promise and critical acclaim never transformed into physical sales which is a travesty as they wrote some of that era’s great anthems. That all seems set to change as BGO Records package their first three albums, and a rumbustious live EP, in a lovely two-disc set.

Circus Of Power, the bands self-titled debut, arrived like an outlaw biker gang with all engines revving and succinctly set out the bands stall. ‘Motor’ is the low down and dirty introduction that seriously cranks up the sleaze factor and finds the band revelling inside a hook laden, punchy sound. ‘White Trash Queen’ mixes things up, kinda like a heavier Stones dancing on hot coals, with vocalist Alex Mitchell displaying an impressive range before ‘Call Of The Wild’ crashes through the gears for the ultimate driving song. Imagine Zodiac Mindwarp jamming with The Cult and you’d have something approaching the glorious rock action that is ‘In The Wind’, a song that captures the best of 80’s metal and wraps it up in a delicious hook.

There’s no fancy production or studio wizardry on Circus Of Power which has the benefit of bringing the bands badass brand of rock n’ roll to the fore. Armed with some of the keenest riffs known to man ‘Heart Attack’ throws some hefty punches while the mean and moody ‘Crazy’ lands the killer blow. There’s another homage to the Stones in ‘Letters Home’ which slivers like a snake over hot sand and segues nicely into the refreshingly politically incorrect ‘Backseat Mama’. ‘Machine’ was a warlike rocker that concluded the original album but the bonus cut, the jaunty ‘Turn Up The Jams’, makes a far better curtain closer.

Riding on a wave of confidence Vices was the bands sophomore album and it found Circus Of Power in shit-kickin’ mode. The addition of bassist Zowie found Gary Sunshine graduating to second guitar and operating as a quintet found the Power packing a potent punch. That’s immediately obvious on ‘Gates Of Love’ which swings wildly and with great abandon and evidences a band locked in a groove that recalls Zeppelin at their heaviest. The addition of slide guitar gives Vices another dimension and makes tracks like ‘Two River Highway’ sound fuller and richer.

The title track is suitably grandiose and ‘Vices’ is a downright stomper that certainly makes its presence felt. The obligatory power ballad raises its head in the shape of ‘Don’t Drag Me Down’, it’s lightweight and reeks of record company interference and is a prime example why suits shouldn’t get involved in rock n’ roll. However, normal service is resumed for the AC/DC infused ‘Last Call Rosie’ and the slightly surreal ‘Doctor Potion’. A track like ‘Got Hard…’ doesn’t bear over analysis; it’s just a great, great song that grabs the listener by the scruff of their neck while ‘Simple Man/Simple Woman’ finds the band departing in a blaze of sonic glory.

Circus Of Power were warmly embraced by the UK (contemporary reviews in Kerrang! gave both of these albums full marks) and, with a sound rooted in no nonsense rock, it’s easy to see why. Drawing influence from The Cult and Zodiac Mindwarp while imprinting their own inimitable stamp on proceedings makes Circle Of Power and Vices essential listening.

Before Circus Of Power scored a record contract they’d been working New York clubs like men possessed so by the time the tapes were rolling for 1990’s Live At The Ritz EP they were a well-oiled rock machine. ‘Gates Of Love’ opened Vices and it makes an equally strong concert opener as it rolls from speaker to speaker with plenty of slide guitar and thundering drums. Likewise, ‘Call Of The Wild’ ticks over like a finely tuned Triumph Bonneville while ‘Los Angeles’ becomes more bluesy in the live environment and allows the two guitarists to display their chops. A bass heavy cover of ‘How Many More Times’ closes this EP with Circus Of Power putting a twist of Americana on this quintessentially English classic.

Released in 1992 at the height of the grunge revolution Circus Of Power’s third full-length Magic & Madness found the band surviving the musical cull. While grunge forced many of their peers to split up or, even worse, jump genres Circus Of Power carried on doing what they do best. A new rhythm section has freshened things up and with a few of the songs breaking the six-minute barrier the group have honed their songwriting craft. But opening cut ‘Swamp Devil’ is reassuringly rock and drips with authenticity and is akin to walking into a New Orleans opium den. If anything, this is a defiant album with all the instrumentation placed prominently in the mix and vying for your attention.

Prior to the release of Magic & Madness Circus Of Power had supported Black Sabbath on the Tyr tour and (maybe subconsciously) influenced the song titles: ‘Evil Women’ is a heavy blues romp while ‘Heaven & Hell’ is a riff fuelled monster. ‘Poison Girl’ is both weighty and lithe, like a welterweight boxer, before ‘Shine’ swirls with a neo-psychedelia. Just like their debut, Magic & Madness is an album that crashes through the gears with ‘Dreams Tonight’ being an unruly rocker, ‘Black Roses’ the dark horse and ‘Waitin’ For The Wizard’ the soundtrack to a bar room brawl. ‘Outta My Head’ and ‘Slip Away’ are the final two tracks and here the tracks could have been reversed as the raucous ‘Outta My Head’ would have made the better closer.

By totally ignoring the prevailing fads and trends Circus Of Power produced a timeless album in Magic & Madness that sounds just as good in 2020 as it did in 1992. If someone asks you what was so great about late 80’s/early 90’s metal just flip them this collection. 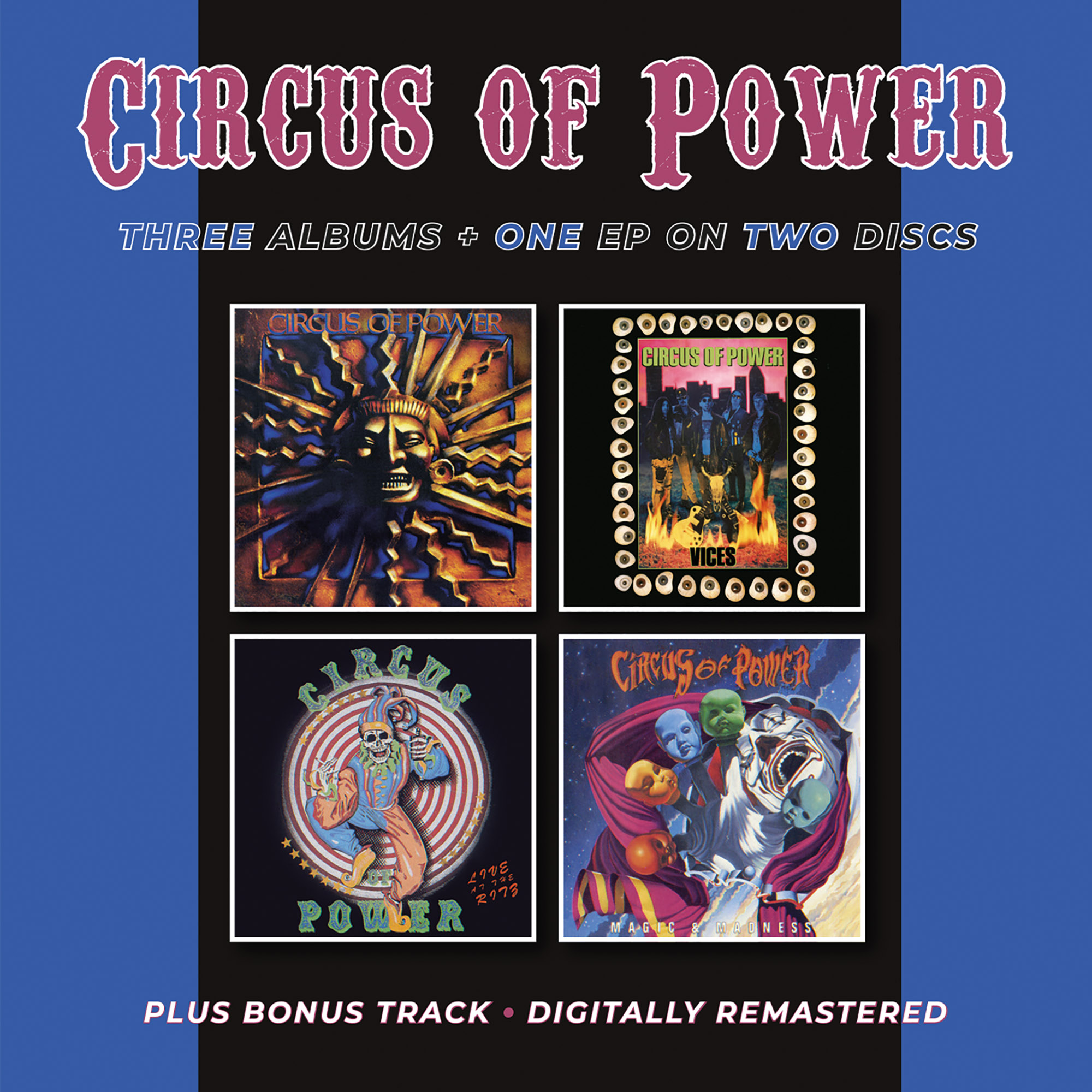