A metallised Lloyd Weber… show tunes for the subculture

For the uninitiated, CIIC‘s frontman, Zak Stevens spent some time as Savatage’s vocalist, appearing on key albums, Wake Of Magellan and Dead Winter Dead, and others. Since the inception of his own band, Circle II Circle, in year 2000, it has been his primary focus. There are few rock or metal bands whose music is resistant to lazy pigeonholing. CIIC is one. The band’s dense mix of thrash, rock opera, prog and stage musical just refuses to conform to the rules of genre labelling. But that is not obviously a Good Thing.

Almost universally, reviews of the band’s last album, Seasons Will Fall reflected the “good news and bad news” mind-set… great performances, lacklustre material. And there also remained a persistent grumble that too often you could see the join, that the mix of styles too often seemed discordant. Unfortunately, Reign Of Darkness does little to dispel any notion that things have changed.

‘Victim Of The Night’ barely breaks out of monotone. It’s sturdily delivered, with lots of scampering piano, stuttering progmetal riffage and razoring axework, but this and other tracks like ‘It’s All Over’ and ‘Taken Away’ never truly climb out of the shadow of their boxed in ambition. That said, ‘Untold Dreams’ and ‘Ghost Of the Devil’ are lights in the darkness, thanks to the true counterpoint between the moody guitars, chorale backing and Stevens’ fierce vocal delivery, very musical, very music hall: a metallised Lloyd Weber… show tunes for the subculture.

Elsewhere, a lack of warmth – though the title is something of a clue – lets the album down. On meandering, apparently aimless tracks like ‘Deep Within’ and ‘Sinister Love’, you can just detect Stevens, and guitarists Wentz and Hudson, and keyboard man, Wanner, searching for something that they and we just can’t see.

The closing track could have been a peach though. Ballad, ‘Solitary Rain’ is a powerful reminder that Stevens and indeed CIIC can rise way above the ordinary. Here, they hitch a plaintive vocal to a haunting piano to create a fully formed faux romantic epic, only to be undercut half way through by sharp edged axework, elbowing its way into the spotlight. It’s a neat demonstration that you really need to have your eye on the prize. 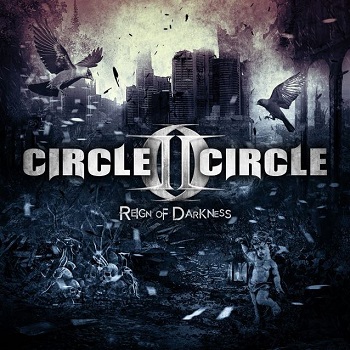